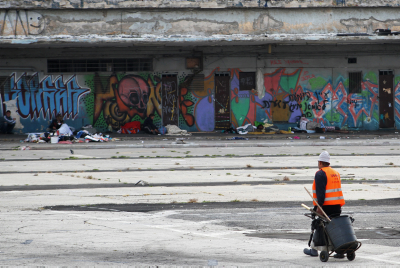 After intense discussions in the Knesset, a bill to establish an urban renewal council to revitalize the centers of cities throughout Israel was authorized.

The bill was authored by MK Eli Cohen, after deliberations with the Finance Ministry and the Housing Ministry.

Among the tasks of the council will be to increase the amount of housing in cities. Many of the centers of Israeli cities have substandard housing that is close to uninhabitable, built decades ago and now very dilapidated.

Urban renewal plans are underway at an unprecedented scale in Israel today. Currently, forty thousand housing units in Haifa are being planned, mostly in the more vulnerable neighborhoods of the city.

An association of residents with the help of Rabbis for Human Rights (RHR) and the municipality of Haifa’s west welfare department have pinpointed a number of problematic factors within the plans, and offered solutions that have little to no budgetary impact.

Upgrading a neighborhood from older buildings to newer ones is usually viewed as a blessing. However, such upgrades bring with them additional fees in the price of housing (city taxes and building maintenance payments) which often results in the pricing out of the poorer populations from their neighborhoods.

This means that poorer populations will be pushed farther from their social surroundings and their places of work. If this process continues to occur, it leads to the creation of more and more urban spaces that are homogeneous in terms of financial status.

This leads to a socio-economic segregation within the areas. These types of changes are known around the world to create serious social issues, and conflict with current best practices and consensus in western nations regarding the creation a social diversity within neighborhoods as they are developed. Diversified apartment sizes along with other mechanisms can provide a solution to economic segregation without stopping the urban renewal plans.

There should be an attempt to first complete the building of the new units, and then the moving of the residents, as opposed to moving first, and then building. The idea is to first build a new building on public space somewhere, and then move the residents to the new building. After this, the old building is destroyed and used as public space (community garden, community center etc). This is how you can reduce the number of moves needed, especially for the old, sick and disabled.