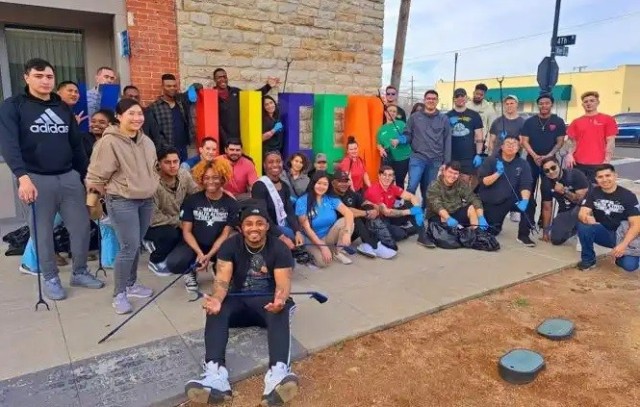 On January 11, 2023, soldiers with Fort Hood‘s Better Opportunities for Single Soldiers (BOSS) program pulled up their sleeves and got their hands dirty to help revitalize the adjacent historic downtown of Killeen, Texas.

Kate Kizito, Killeen’s downtown revitalization director, explained that she felt the BOSS partnership was a great opportunity to get Soldiers involved and make Killeen a better place for everybody.

She noted that the downtown area is rich with history. It is the first registered mid-century modern historic district in the state of Texas, and the “King” himself, Elvis Presley, once called the area home. 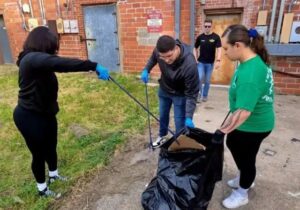 “Our historic district is truly the heart of Killeen. It’s where our city started back in the 1800s and when a lot of these buildings were built up to the 1950s and it’s important for us to preserve it. A lot of our culture is in these walls, our memories are in these walls and to make sure that this area is brought along to the future is important,” Kizito said.

“The historic district is just steps away from the Rancier gate and I think it’s so important that Soldiers feel at home when they come down here, that they know there’s great restaurants, great places to go on the weekend to hang out, fun places for their families to visit. So, it’s important for us to get the BOSS program down here so that way they feel a part of this community and that we show to Fort Hood that partnership that we all want,” she said.

The BOSS program partnered with the City of Killeen to perform area beautification throughout the historic downtown area.

The city has been organizing what they call a “blitz” downtown for the past few months: performing litter pick up, street sweeping and anything else that helps to make the area more appealing.

Soldiers equipped with trash pickers and large black trash bags picked up litter on Avenue D, from 4th Street down to 10th Street and surrounding blocks.

Though only a handful of Soldiers were scheduled to participate, nearly 40 turned out to support the effort. Cpl. Jasmine Tcha, Fort Hood BOSS vice president, was grateful for the turnout, and excited to give back to the community.

“Killeen is our city, too,” Tcha said, noting that it’s great to give soldiers a break and let them see their city and get out and socialize with other troops who want to volunteer.

“More than half the soldiers that are here today haven’t even seen the downtown Killeen area and that there’s more to do,” Tcha said. “We want to let them know that we care and the city cares about us as well as soldiers.”

The city council recently started a downtown advisory committee and extended an invitation to the BOSS program “to partner together and ensure downtown Killeen is a place where everyone in our community wants to be,” Kizito said.

Cpl. Kandice Harmon, a BOSS unit representative, was excited to be part of the volunteer efforts to clean up the community and has no problem rolling up her sleeves.

“There’s so much to do to give back to the community, and if it’s just offering a little bit of your time out of your day to do something such as beautification and picking up trash, then there’s no reason why we can’t get out of bed, get dressed and get out here and get some work done,” Harmon concluded.

Clean-up efforts are scheduled monthly, and Tcha and Kizito are both excited for the BOSS program to be part of the revitalization efforts going forward.

Photos courtesy of the U.S. Army.