“Communities across the state are revitalizing vacant brownfields sites and these designations provide the resources to make their grand visions a reality,” Governor Cuomo said. “This Brownfield Opportunity Area program gives local leaders the power to bring about much-needed change to properties that have been neglected within their communities, and we look forward to seeing progress and development as we transform communities across New York.” 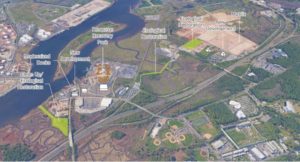 Projects in Staten Island, Flushing and Auburn have been designated, bringing the total number of BOAs throughout the state to 47.

New York Secretary of State Rossana Rosado said, “Every day, the Department of State supports the work done by local leaders across New York. Designating these projects as Brownfield Opportunity Areas underscores our ongoing commitment to revitalizing localities. These new designations will help communities attract public and private investment to reverse the blight caused by vacant and underutilized brownfields, open up new opportunities for housing and commercial development, and create a better quality of life in the area.”

The communities received planning grants through the state’s Brownfield Opportunity Area program to put forth a comprehensive revitalization strategy to promote effective redevelopment and enhanced environmental quality in each area. The New York Department of State, which administers the program, determined these projects meet the necessary requirements and criteria for designation.

DEC Commissioner Basil Seggos said, “Every year, New York’s Brownfield Opportunity Areas and Cleanup programs are putting dozens of underutilized properties back into productive use while restoring and reenergizing formerly blighted communities across the state. Cleaning up and restoring brownfield properties are critical to safeguarding public health, protecting the environment, and developing community assets with the potential to bolster local economies and improve quality of life.”

Senator Andrew J. Lanza said, “I want to thank Governor Cuomo for The Brownfield Opportunity Area program that will help Staten Island prosper for generations to come. By dedicating resources to effectively plan for future remediation and redevelopment, we are ushering in a new, sustainable era for the entire Island.”

Assemblymember Michael Cusick said, “This Brownfield Opportunity Area designation gives Staten Island a needed shot in the arm to bring about renewed growth and development. I applaud Governor Cuomo for making the designation and for recognizing the potential on Staten Island’s West Shore.”

Flushing: Flushing Willets Point Corona LDC completed a Brownfield Opportunity Area nomination for a 62-acre area of former industrial property between downtown Flushing and the waterfront with 32 potential brownfields. Redevelopment of the area will accommodate a fast-growing population and link the existing downtown to the waterfront. Key recommendations include actions that will become catalysts for redevelopment of the area, including:

Assemblymember Ron Kim said, “Flushing’s Willets Point and Corona areas are ripe for revitalization, and Governor Cuomo’s designation of the area as a Brownfield Opportunity Area is one more positive step forward for our community. We are grateful for this designation, which will ultimately create jobs and housing for New Yorkers in areas that were blighted and neglected.”

City of Auburn: This 573-acre Brownfield Opportunity Area encompasses both sides of the Owasco River and most of the City’s downtown, surrounded by a mix of residential neighborhoods, commercial, municipal, recreational and industrial properties. Major thoroughfares, including Route 5, Route 20, and E. Genesee Street, intersect the area north of downtown. The area includes key buildings and sites such as the Auburn Correctional Facility and the Bombardier site and is characterized by over 13 brownfield sites totaling 60 acres, as well as numerous other vacant and/or underutilized sites. The primary community revitalization objectives include:

Senator Pamela A. Helming said, “The important funding provided through the Brownfield Opportunity Area Designation will help the City of Auburn develop a plan for the future. The City of Auburn is already working aggressively to enhance neighborhoods, rebuild downtown, and has successfully transformed itself into a tourist destination. This funding will allow them to further build on these efforts. As State Senator, I will continue to partner with the Governor and Mayor Quill to deliver new opportunities for Auburn as it continues its renaissance.”

Auburn Mayor Michael D. Quill said, “Thanks to Governor Cuomo’s efforts in designating the Auburn Sparks area as a Brownfield Opportunity Area, we now have tools in place to start rebuilding and revitalizing the community. This project will bring immeasurable benefits to the city of Auburn and we are excited to see it come to fruition.”

Photo of the channelized Owasco River in Auburn, NY via Google Maps.