As Michigan works to recover and revitalize its, the new State Historic Tax Credit program signed into law by Governor Gretchen Whitmer on December 30, 2020 will help support place-based projects while promoting the restoration and preservation of the state’s historic resources.

Eligible properties must be listed in the National Register of Historic Places, the State Register of Historic Sites, or be in a local historic district, and either be individually listed or contribute to a listed district. The credit has a $5 million cap per calendar year, which will be divided into:

Credits will be awarded on a first-come, first-serve basis.

The MEDC (Michigan Economic Development Corporation) and SHPO (State Historic Preservation Officer) are already working to begin the required administrative rulemaking process, which based on state statute may last 12-18 months, to effectively establish and administer this program, ensuring developers, homeowners and communities can access this welcome support. Details such as application procedures, more detailed eligibility requirements, transfer rules, etc. will be determined as part of this process.

Twelve historic Michigan properties were given special recognition in 2020 through their listing in the National Register of Historic Places , the Michigan Economic Development Corporation has announced. Administered by the Michigan State Historic Preservation Office , the National Register of Historic Places is the United States federal government’s official list of districts, sites, buildings, structures, and objects deemed worthy of preservation for their historical significance.

“From Detroit to the Soo and from individual properties to commercial and residential historic districts, these historic properties tell the stories of our communities, our state, and our nation. They illustrate our shared history, foster a sense of pride in our communities, provide recognition of our historic places, and generate investment and economic activity,” said Deputy State Historic Preservation Officer Martha MacFarlane-Faes. “SHPO is proud to join with so many people and communities across the state in celebrating a diverse group of properties that have been listed in the National Register of Historic Places in Michigan in 2020.”

To be considered for listing in the National Register, a property must generally be at least 50 years old, and must also be significant when evaluated in relationship to major historical events or trends in the history of their community, the state, or the nation. A property must also possess historic integrity…the ability to convey its significance.

Twelve Michigan properties were listed in the National Register in 2020: 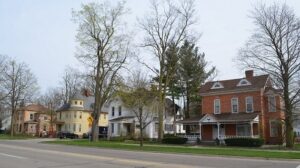 One of Michigan’s newly listed districts is the Charlotte Central Historic District in Eaton County, southwest of Lansing. This is the largest Michigan district added to the National Register this year, encompassing 364 buildings and structures, of which 315 are considered to contribute to the historic character of the area.

“We are excited to have this recognition. Downtown Charlotte features hundreds of historic homes and buildings, representing every era of Mid-Michigan’s celebrated past. From the 1885 Eaton County Courthouse to the newly renovated Beach Market and the popular Eaton Theater, there is a lot for residents and visitors to discover,” said Charlotte Community Development Director Bryan Myrkle. “The documentation created for this nomination will be a valuable resource for everyone interested in our local history from this point forward.”

The Charlotte Central Historic District is centered on the 1885-built Eaton County Courthouse and radiates in all directions from there, encompassing the downtown, nearby residential blocks, a school, a former Carnegie library, and two former railroad depots. Buildings contributing to the significance of the district were built between the 1860s and 1967.

“The Charlotte Central Historic District was a multi-year project. Properties of this size are often complex, and so it can take some time to complete the nomination, which includes photographs of the entire district and fairly detailed maps,” said SHPO National Register Coordinator Todd Walsh. “The process involved documenting the history of the community and the resources within the district, identifying significant historical themes, and evaluating each resource. But the city of Charlotte has a such rich history, it was worth the effort and was well-deserved for this community.”

Other historic districts listed in 2020 include the Sault Ste. Marie Historic Commercial District in Sault Ste. Marie, which encompasses the commercial downtown of this Upper Peninsula community; the Michigan Avenue Historic Commercial District, a small commercial district of just two blocks in Detroit; and Northland Gardens, a Modern residential district in Southfield developed from the mid-1950s to 1970.

Listing of a property in the National Register is honorary and places no restrictions on what a property owner may do. They are not required to open the site to the public nor to display a plaque acknowledging the listing, although many companies offer plaques to recognize the hard work and effort to get a property officially listed. In addition, listing in the National Register provides opportunities for promotion, makes available certain incentives like grants and tax credits that foster investment in our cities, towns, and villages, and allows for the consideration of historic resources when federal funding or permits are involved. 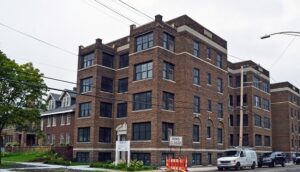 Great Lakes Manor, another Michigan site added to the Register in 2020, is notable for its role in the patterns of American history. Outwardly looking much like dozens of other brick multi-story apartment buildings in Detroit from the first decades of the 20th century, the building gains its significance as one of the first in the city to rent to African American individuals at a time when housing discrimination was rampant. The nomination chronicles the story of housing segregation and the struggle African Americans faced to find places to live.

The listing of Great Lakes Manor in the National Register not only documents its history but enables another benefit of listing as well. Income-producing properties such as rental residential and commercial uses may qualify to use the Federal Historic Preservation Tax Credit if their building is individually listed in the Register or contributes in an historic district.

The federal program provides a 20 percent credit on the total qualified rehabilitation expenditures for significant work when the work meets certain standards. In this case, Great Lakes Manor and its 30 apartments were completely rehabilitated in 2019 and 2020 using the federal tax credit and is now known as Kirby Manor. 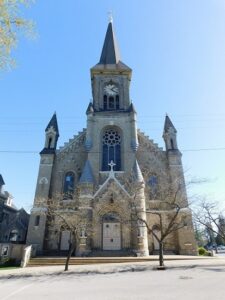 Personal connections and a love of history guide some National Register nominations. In Manistee, the Guardian Angels Historic Preservation Project group has been working since 2014 to preserve and repair the former Catholic church building which was completed in 1890. Research for the nomination revealed new and interesting information about architect Adolphus Druiding and a unique architectural style known as Rundbogenstil.

Druiding was German-born and trained and became a prolific church architect after immigrating to the United States in 1865. Guardian Angels is possibly the only Druiding project known to exist in Michigan. The repetition of round archways and rounded arch windows, unique notches in the eaves, and the eyebrow windows in the roofline are all hallmarks of this architectural style.

“Guardian Angels is the significant beacon in our community; a 130-foot steeple visible from all directions welcoming visitors and residents alike. Manistee lost an astounding number of significant Victorian structures through neglect or urban development in the last century. This church has been on the precipice for the last decade and its future has never been more uncertain,” said Matt LaMore, Guardian Angels Historic Preservation Project committee member. “With designation on the National Register of Historic Places we are turning the tide in a positive direction. The designation came during our first successful campaign for restoration funds and has provided more traction for our preservation project. We are grateful to the SHPO staff for guiding us and encouraging us.”