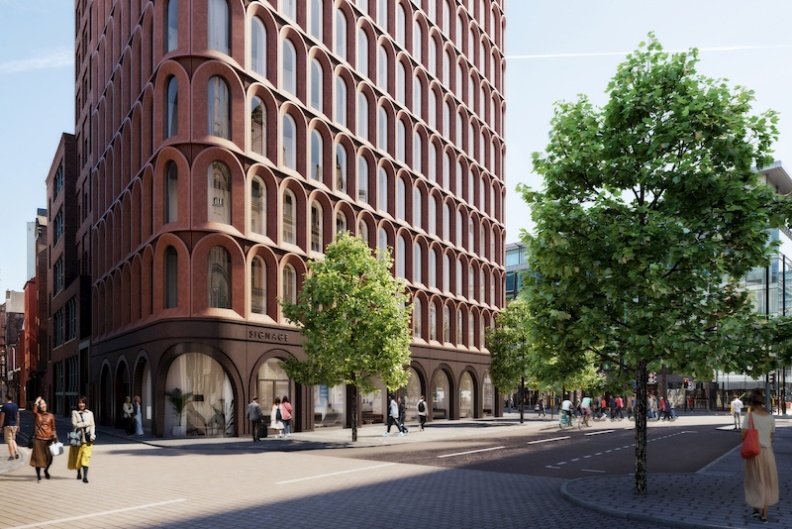 An exciting new hotel project will reuse and restore a historic 19th Century office building, and will add an 11-story new infill structure on a derelict lot.

Together, they will provide a revitalizing gateway to the Northern Quarter of Manchester, England, and will transform a prominent city center site. 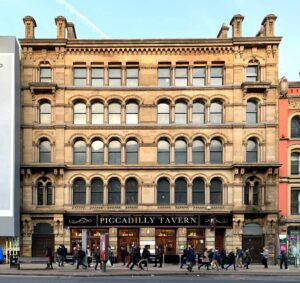 The high-quality, contemporary 4-star-plus hotel will be operated under the Pestana CR7 brand. It will offer over 150 rooms, with a welcoming ground floor lounge bar and rooftop with external terrace, both for guest and public use.

It would see the refurbishment of the Grade II listed 69-75 Piccadilly, a former 19th Century combined office and warehouse building known as the Halls Building.

The Piccadilly Tavern, which occupies the ground floor of the listed building will also be refurbished as part of the project, and the redevelopment is completed through new build elements to the rear and adjacent 67 Piccadilly.

The prominent site is located within the Stevenson Square Conservation Area at a key entry point into Manchester’s Northern Quarter, with frontage onto Piccadilly and along Newton Street. The current building at 67 Piccadilly has been hidden behind hoardings for over a decade due to it being in a state of disrepair.

The proposals seek to re-engage this neglected corner with a bold and distinctive design that references the unique character of the Conservation Area through materiality, color and façade proportions. 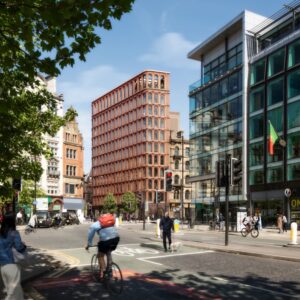 Simon Doody a partner at the project’s design firm, FCBStudios, said “The corner site is long overdue for redevelopment and in a prominent position that requires a strong architectural presence. The vaulted archways wrapping around the building offer an honest representation of the repetitive nature of the hotel brief, resulting in a contextual and elegant façade design. This sets the tone for the 4* hotel and transformation of the Piccadilly area.”

Improvements to the public realm are intended to create an open and welcoming space outside the hotel, while establishing a sense of safety at the corner of Piccadilly and Newton Street.

The proposed planting of trees and widened footways help to create an active street scene for hotel guests, neighboring residents and pedestrians passing through.

The proposal was given unanimous approval at Manchester City Council planning committee in late November of 2020.

All images courtesy of FCBStudios.