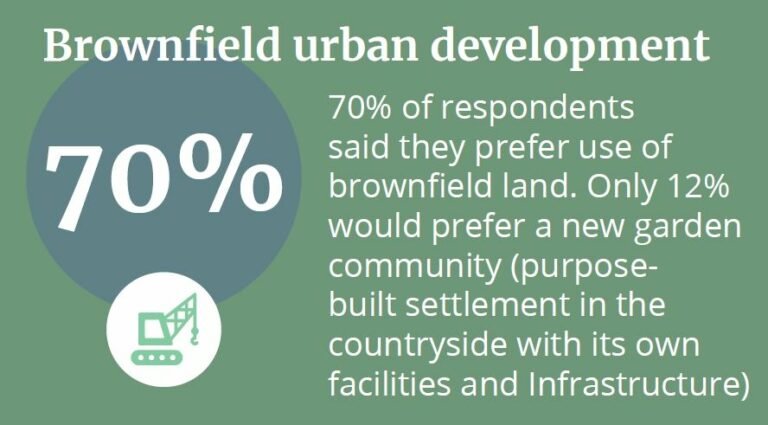 The Copper Consultancy’s latest study, Attitudes to Housing and Community, has found that there is a significant disparity in support of local housebuilding when it comes to the use of brownfield sites or green space for new developments.

The need for delivering housing continues to grow, but developers need to consider local priorities regarding the scale, location and type of housing, which can vary.

A total of 70% of our 1,600 respondents stated a preference for new housing to be built on brownfield sites. Only 12% favoured the creation of a new garden community built on green space with accompanying infrastructure.

People were more likely to prioritise developments when they also provided improved local infrastructure such as transport connections.

Even if a new housing development was built on greenfield land, 50% of respondents would still be supportive if it provided new or improved local infrastructure. Similarly, 49% would support a development on green space that provided affordable housing for local people.

There appears to be a North – South divide when it comes to concerns relating to new housing developments.

Scotland, the North, the Midlands and Wales were more likely to be concerned about impacts on green space than impacts on local infrastructure. The reverse was the case for London and the South West.

Engaging with the community

Housing developments can take years to move from inception to completion, during which time support can fade and opposition increase. As with any new project, developers need to secure buy-in from local communities at an early stage to gain acceptance from the public.

Proactive engagement from the pre-planning stage is crucial to ensure local priorities are understood and can be met with tangible benefits for the community.

However, local wants and needs cannot be assumed. There is a need for projects to align with local objectives in order to outline the opportunities for the community.

Read the full Attitudes to Housing and Community report (PDF).