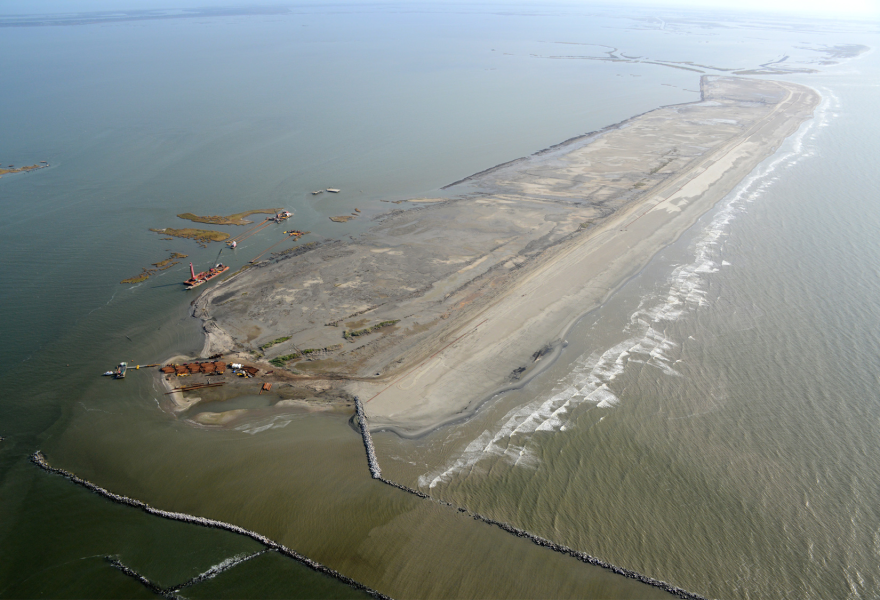 This excellent slide show produced by the National Oceanic and Atmospheric Administration (NOAA) details the efforts to restore natural hurricane protection to Louisiana’s Gulf of Mexico coast via the restoration of barrier islands.

Coastal wetlands play a key role in helping to reduce impacts from storm surges on coastal communities. A report released by the Army Corps of Engineers in 1963 showed that every 2.7 miles of wetlands can create a buffer against 1 foot of storm surge. Wetlands can be an effective means of protecting lives and property.

Coastal Louisiana has lost an average of 34 square miles of wetlands per year for the last 50 years. This totals 1,900 square miles of land lost from 1932 to 2000, roughly an area the size of the landmass of Delaware. These losses are due to erosion, subsidence, and development including the construction of levees on the Mississippi River.

Hurricane Katrina swept over Louisiana’s vast coastal wetland complex before striking land along the coastal communities of Louisiana, Mississippi, and Alabama. More than 40 miles of forested wetlands, marsh, and barrier islands once buffered the New Orleans metropolitan area, but this natural protection has been lost over decades. This led to further infrastructure damage during Katrina.

This doesn’t have to be the end of the story— beaches, dunes, and marsh habitat can be rebuilt. NOAA has taken a lead role in designing and constructing restoration of Louisiana’s barrier islands, with a particular focus on the islands of the Barataria Basin.

Since most of the islands have not been developed, we are able to re-create the entire habitat from the beaches of the Gulf of Mexico. Sand and mud is harvested from offshore or renewable sources in the Mississippi River using a hydraulic dredge. The sand and mud is pumped dozens of miles away to be shaped into new habitat where barrier islands once existed.