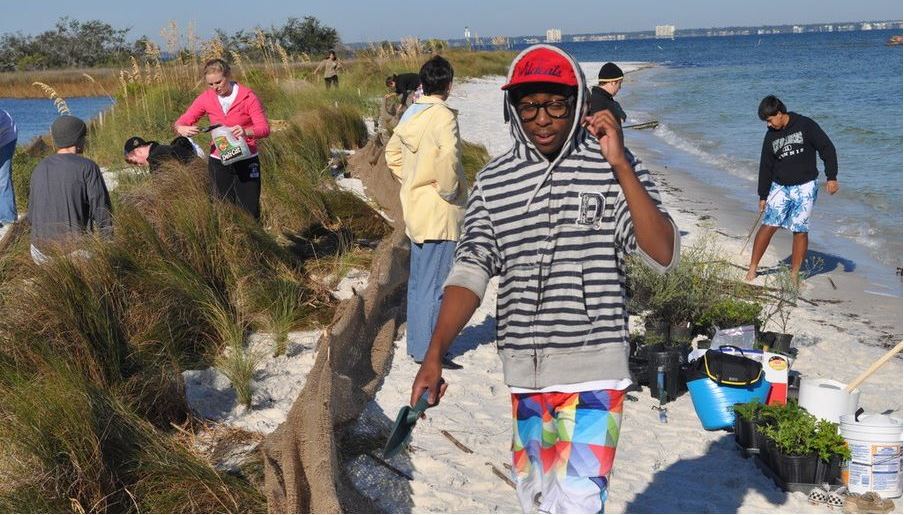 One phase of the ongoing ecological restoration of Deadman’s Island of the coast of Gulf Breeze, Florida is nearing its end.

Since the beginning of the 2017, over 1,000 volunteers have performed sometimes back-breaking work in the hot sun to protect the barrier island from additional erosion. 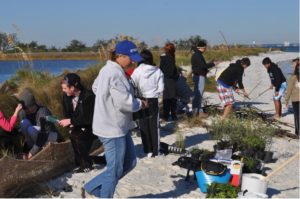 Heather Reed, project manager for the restoration contracted by the city of Gulf Breeze, said the latest phase on the northeast end of the island will “hopefully” be completed this summer.

Reed’s most recent work at the island included leading volunteers to plant native grass in the sand to act as a stabilizing agent, overseeing the movement of thousands of pounds of sand to repair a breach and stacking big, gray rocks along the shoreline.

“Restoration is complicated,” said Reed, who has worked on marine restoration for two decades. “You have to put up different methods of defense.”

[From Deadman’s Island Restoration website, text by Heather Reed] The Deadman’s Island Restoration project addresses the loss of wildlife (aquatic and terrestrial) habitat due to the impact of hardening developmental activities. Seven acres of salt marsh destroyed by erosion due to the erection of seawalls, bridge construction and dredging activities. This development, according to coastal engineers, created a deficit in the sediment budget of the transport of littoral sand needed to renourish the area. Renourishment and protection were needed to protect an unmarked cemetery several shipwrecks, a ten thousand year old salt marsh, marine oak hammock community and unique coastal barrier ecosystem habitat.

This unique area and bird sanctuary is in jeopardy of being destroyed. The Marine Oak Hammock community, which contain several species of oaks, which is very rare ecosystem throughout the State of Florida. Due to development activities on and along the coastal shoreline of the western Gulf of Mexico. This unique area represents a piece of endangered habitat. Due to this loss of marsh, and changes due to development and permitted activities, the native oyster habitat has declined.

The only solution was to slow down erosion by providing breakwaters, which contained natural resources, such as oyster shell, transport sand to renourish the shoreline and create a wetland to cover and protect historical resources. Breakwaters such a Reefblk and Ecodiscs are used to create these breakwaters and stopping an underwater current and a 12 mile fetch impacting the shoreline. These wave breaks will increase the population of native oyster habitat by providing a foundation for a natural oyster reef made from recycled oyster shells. This oyster wave break structure will also provide a marine habitat for large fish and marine organisms. In addition, this unique oyster wave break, will provide protection for the existing coastal and marsh habitat, and will increase species’ population and biodiversity.

The oyster reef will additionally provide benefits to shore birds. This area is a migratory birds drop zone. The reef will create juvenile fish habitat. The shell liberated from the oyster reef from grazing of larger fish will wash onto the shore to form a beach. Shorebirds prefer shell beaches as nesting areas since shell drains quickly and retains heat for egg incubation. This project will demonstrate the ability to combine a successful technique of creating vertical reef habitat to dissipate wave energy, and to create essential fish and birds habitat.

The transferability of this project to other coastal areas is already being viewed as an alternative to rip rap. The wave break provides native oyster habitat, which has declined in the area. THe design of the wave break will bring back oysters as seed for Pensacola Bay and ecological engineers. This reef design offers many benefits to the ecosystem, as opposed to unnatural seawall or riprap which offers very little habitat value and can breakdown, scour and sink over time. The reefs offer a natural alternative to protect this coastal barrier island and habitat. Homeowners, where feasible, want to use this design to create a living shoreline as opposed to hardening their shoreline. This project would be beneficial in other coastal areas for habitat restoration.

Deadman’s island is now a study site for the Army Corps of Engineers, NOAA, several other government agencies and is part of the Case Study Gulf Of Mexico Alliance Governor’s Action Plan for Sediment Management.

Deadman’s island is now a study site for the U.S. Army Corps of Engineers, NOAA, several other government agencies, and is part of the Case Study Gulf Of Mexico Alliance Governor’s Action Plan for Sediment Management.