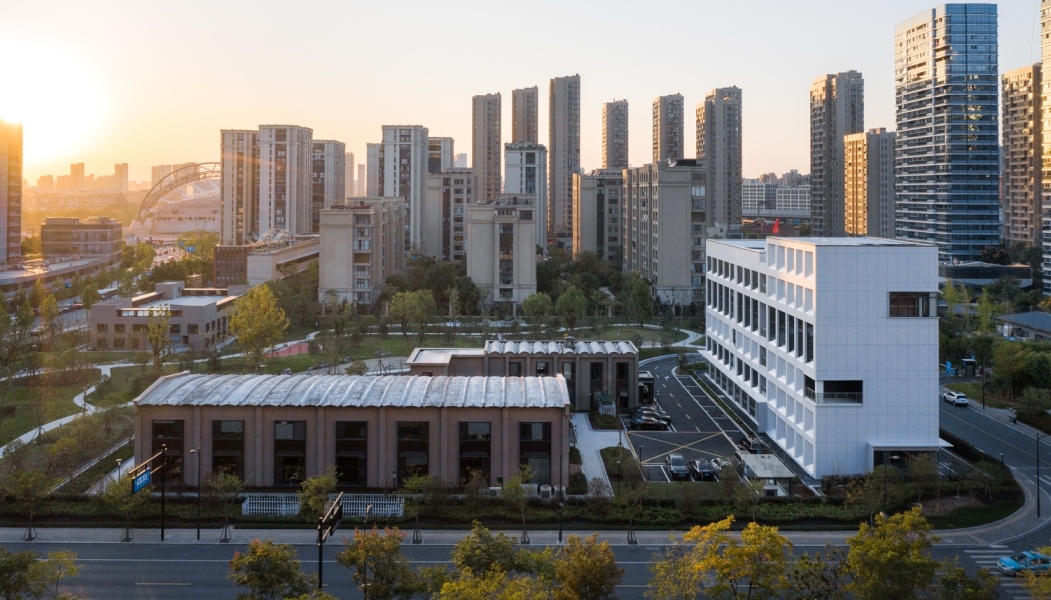 Located on the Blue Peacock Block in the Gongshu District of Hangzhou, China, this renovation project’s planning, architecture, landscape and interior are all the product of LYCS Architecture.

The project comprises two parts, the office and the city park. 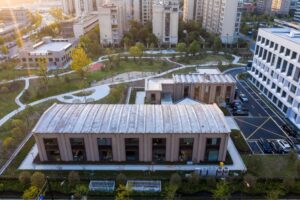 The Blue Peacock Chemical Fibre Factory was one of the largest fiber enterprises in China at that time. Its products were exported to twelve countries and regions in Eurasia.

In the 1990s, Gongshu District transitioned from industrial to urban life function. High-energy and high-emission enterprises in the region had been shut down and transferred one after another, and the original site of the Blue Peacock Chemical Fiber Factory had gradually been abandoned.

Until 2018, which is when Hangzhou Industrial Development Group joined hands with LYCS Architecture to launch the renovation project, which ushered in an opportunity to resurrect the old factory and its surroundings.

Repair the Old as the Old 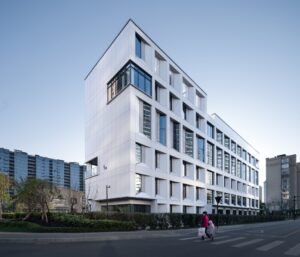 There were five legacy buildings on the site, including four factories and one factory dormitory, which were built between the 1970s and 1990s. The building structure was mainly concrete frame structure and brick-mixed structure.

The external facade was seriously eroded, and most of the doors and windows had been seriously damaged. people can still clearly feel the industrial atmosphere of the land through the mottled walls, rusty window frames and landmark roofs. 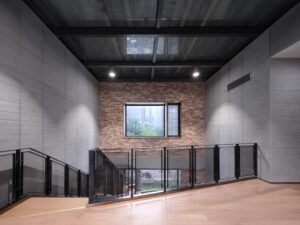 Most of the envelopes of the buildings were damp, unable to meet basic needs such as insulation, insulation and waterproofing, and need to be dismantled and rebuilt. In the enclosure structure, arched roofs, old bricks and walls with the words “catching revolution and promoting production” were very landmark in the era. At the beginning of construction, these reserved elements were carefully peeled, retained and professionally processed from the building.

Large floor windows were designed on the facade to meet the needs of indoor office space for light quality. The vertical window frame was equipped with simple lines. The bronze aluminum plate was in sharp contrast to the “old as old” wall, which embellished the exquisiteness of modern office buildings in the original rough wool left over from industry.

The design put new spatial elements into the old building to inject new vitality into the old factory. The corridor was placed between the three old factories to enhance the coherence of various functional spaces and met the spatial requirements of modern office. The material of the corridor was consistent with the window frame, and dark gray aluminum plates were used to coordinate the overall tone of the building.

Repair the Old as the New 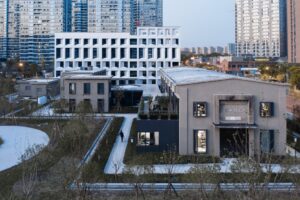 The new park was about to integrate into the modern city with a new role, the owners and designers hoped that in addition to bringing people the memories of the industrial era, more new elements would be placed in it to meet modern office needs and better integrate into the city.

The “Little White Building” used to be the employee dormitory of the chemical fiber factory. As the carrier of the connection between the site and the city, the design strategy of “repair the old as the new” to realize the continuity of the city interface. The design of the facade was modified on the basis of retaining the original frame structure.

The façade design of the “Small White Building” respected the number of column mesh modulus of the original structure. Through the staggered window opening design, it made the building innervation and visually weakens the heavy sense caused by the original building scale. The hidden design of the open fan makd the lines of the facade simple and symmetrical, and the visual effects presented were cleaner. While meeting the lighting and ventilation needs of office space, it also improved the overall texture of the building. 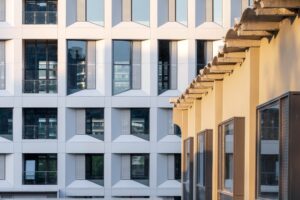 The design adopted a “box in box” method: internalize independent functional spaces (small boxes) in the original architectural frame structure (large box) and placed modern office spaces into old factories. The arched roof of the old factory was designed to be installed back in its original position.

The reinforced material of the indoor roof was made of transparent glass, so that the arched roofs exist indoors like “historic relics samples”.

As one of the box, the concrete structure of the office was completely exposed, and the retained old red brick forms a unique interface rhythm. Another adjacent space was composed of modern materials such as wood finish and copper-like stainless steel. Naturally divide office and leisure space through the strong contrast between new and old materials, and created a cross-time and space experience in the same space. 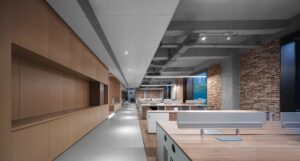 The old Communist Party slogan of “catching revolution and promoting production” needed to be repositioned.

The preserved old bricks of the factory had returned. The arched concrete roof of the original factory had been reloaded back to the roof.

After two years of design and construction, the Blue Peacock Industrial Survival Park has been officially reopened.

Beyond 50 years of time and space, historical imprints and modern life are intertwined. Blue Peacock Park gives back to the community in a brand-new way and integrates into the city.