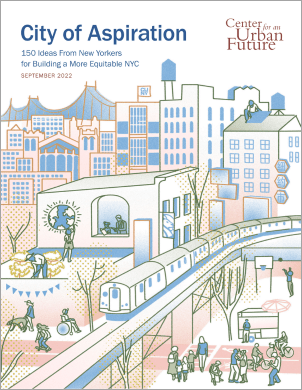 On September 28, 2022, the Center for an Urban Future published its new report, “City of Aspiration: 150 Ideas from New Yorkers for Building a More Equitable NYC.”

There is growing consensus among city policymakers that New York needs to create a more equitable city. This new report provides a roadmap for how the city can get there, with 150 New York-based leaders and national experts each sharing a single policy idea for what city officials should do to make progress towards a more equitable city.

The report, which was made possible through support from Winston C. Fisher and Fisher Brothers Foundation, contains ideas both practical and visionary—from providing free online tutoring for low-income students and removing degree requirements for many city government jobs to helping more inventors of color apply for patents, training front-line social workers to become legal advocates, assigning an architect to every community board, and even creating community choirs across the city to spark joy through the power of song.

The Center for an Urban Future (CUF) is a think tank focused on building a stronger and more inclusive economy in New York and expanding economic opportunity for all New Yorkers. This report is part of CUF’s Middle Class Jobs Project, a research initiative made possible by the generous support of Fisher Brothers Foundation and Winston C. Fisher. CUF receives general operating support from The Clark Foundation, the Bernard F. and Alva B. Gimbel Foundation, and the Altman Foundation.