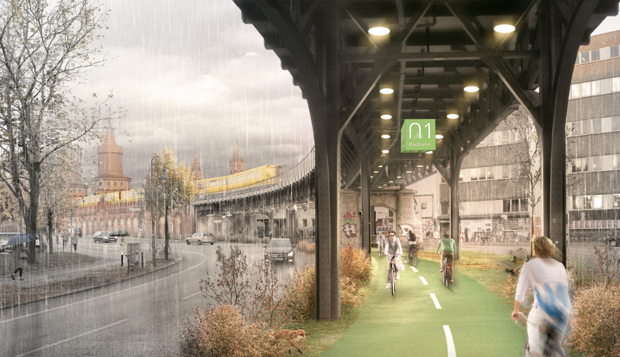 While Copenhagen, Denmark continues to live up its reputation as the best city in Europe for cycling, Berlin, Germany continues to fall behind.

But there is a solution that could help put it on the right track: The Radbahn, a proposed five-and-a-half mile protected bike lane under a street-level subway bridge that connects the east and west sides of Berlin.

The idea comes from Finnish entrepreneur and cyclist Martti Mela, who hopes to see construction start by 2018.

The concept was recently awarded the Federal Eco-design Award by Germany’s Federal Ministry of Environment, and the first part of their feasibility study will be released on July 30.

The idea came about in 2014 when Mela was biking to work in the city and would see a straight line under the U1 subway line for parked cars. “I cycled through it and realized it was wide enough,” he says. “I was wondering, ‘why hasn’t this been thought of before?’”

The idea excited an architect friend, Matthias Heskamp, and three other architects, who all came on board to develop the idea further.

Financing the project is manageable considering roughly 80 percent of the work is already done since most of the road is paved with asphalt.