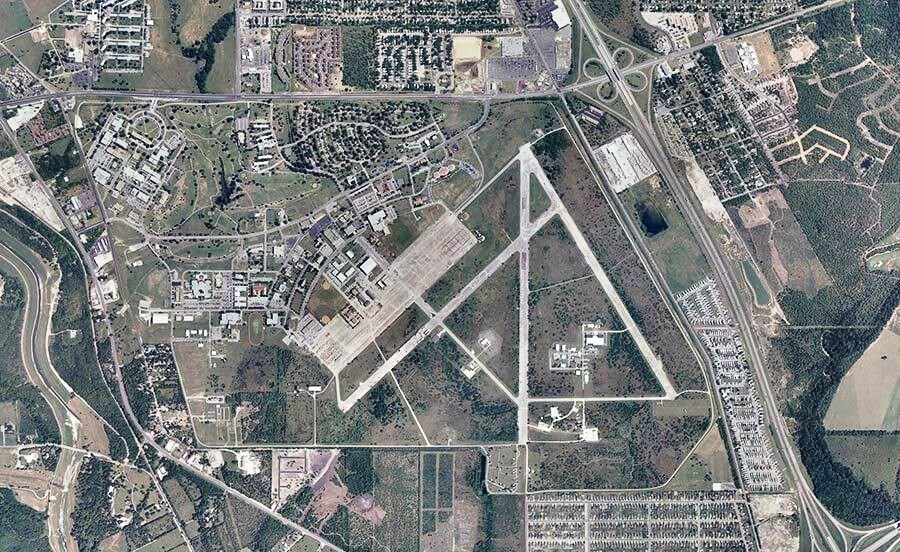 In Texas, on San Antonio’s Southside just 10 minutes from downtown, Brooks City-Base, has rapidly been transformed from a dead U.S. Air Force Base to a major economic redevelopment asset that’s revitalizing adjacent neighborhoods. 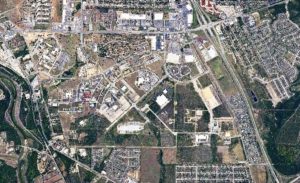 Satellite photo (courtesy of EDA) shows the base in 2018, after significant redevelopment.

In October 2018, Brooks announced its latest economic development success: the former base’s designation as the future site of the U.S. headquarters of OKIN BPS, a Prague-based business process and services provider.

After a two-year site selection process, OKIN BPS ultimately chose to locate at Brooks based on the growth, location, and an increasingly diverse workforce available on campus and throughout the city of San Antonio. OKIN has committed to creating at least 1,400 new jobs at its Brooks headquarters.

Brooks’ success hasn’t happened in a vacuum: the U.S. Economic Development Administration (EDA)—part of the U.S. Department of Commerce—as well as state and local partners, have been critical to the former base’s redevelopment. EDA emerged as an early supporter of Brooks’ work to modernize the campus’ infrastructure, granting essential funding to demolish aging infrastructure in 2015.

In 2015, EDA announced a $1.2 million Economic Adjustment Program investment in the Brooks Development Authority. This grant allowed the Brooks City Base community to turn unused land and buildings on the site of the former Air Force base into a viable area for business growth and investment. The newly available spaces acted as an engine for economic growth as they marketed innovative business in the bioscience, technology, and renewable energy markets. This investment into the region is part of a $2.075 million project that the grantee estimates will help create 1,500 jobs and attract $42 million in private investment.

Brooks’ focus centers on addressing the needs of the surrounding community – from employment, to housing, to transportation. Once home to approximately 2,700 military personnel and civilians, the Brooks Tax Increment Reinvestment Zone (TIRZ) now supports nearly 13,000 jobs, both directly and indirectly, in 11 major industry sectors with more than $440 million in annual earnings.

In 2004, Brooks and the surrounding acreage was valued at $36.8 million. Today, that number is $617 million, with an economic impact on the area of more than $1.5 billion. This valuation increase was aided by Brooks’ designation as a Tax Cuts and Jobs Act Opportunity Zone, allowing for private investors to reduce their federal tax liability on capital gains from investment in business, real estate and commercial development on the mixed-use campus.

Brooks’ mixed-use community is attracting more residents to campus as it blossoms into an urban hub for the growing Southside economy. With nearly 500 acres of undeveloped land remaining, the campus presents great opportunities for continued growth. Projects on the horizon include the development of single-family homes and an independent senior living facility.

With community as its foundation, Brooks is making it a priority to create housing options that will allow for lifelong residents and their families to continue to grow while remaining on the Southside. Brooks is also tackling transportation challenges to increase access to the Southside and beyond.

A new San Antonio VIA Metropolitan Transit hub is already in development to reconnect the campus to the community, with plans for service to begin in early summer 2019. Brooks is also working with local, state, and federal partners to secure funding for a one-mile extension of South New Braunfels from its campus to Loop 410, a nearby major highway.

While Brooks’ short-term goals focus on meeting its strategic goals for the next fiscal year, its long-term vision centers on how the mixed-use community is contributing to the bigger picture for the Southside and for the City of San Antonio.

Featured photo (courtesy of EDA) shows the base in 2013 prior to redevelopment.

This article originally appeared on the EDA blogsite. Reprinted here (with minor edits) by permission.