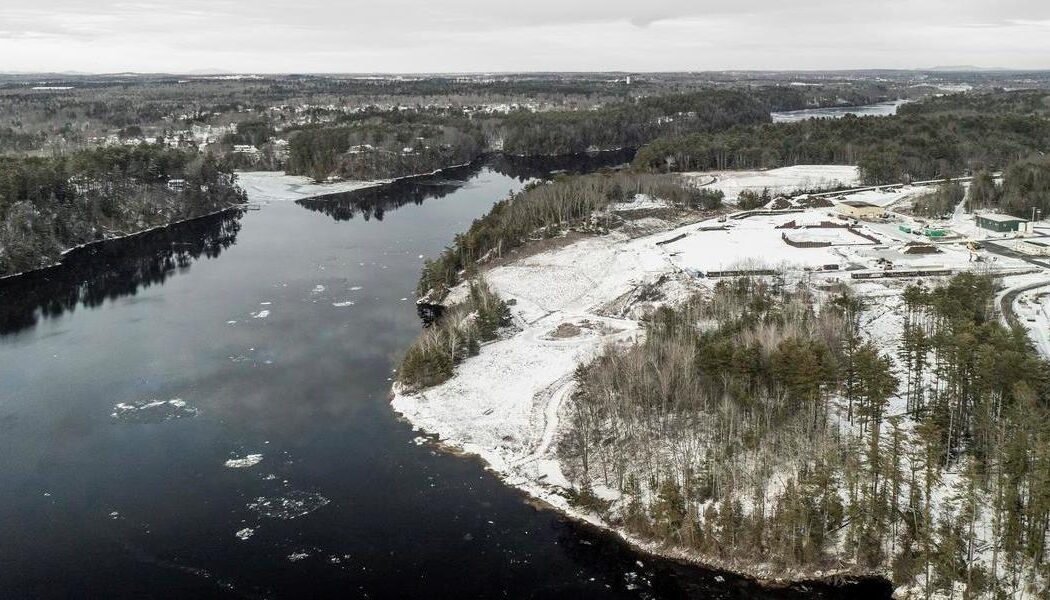 In October of 2022, a 22-year court battle ended in a restorative victory for Maine‘s Penobscot River.

After more than a half century of toxic mercury contamination, Maine’s longest river is finally getting cleaned up. It’s a major win for the public interest over corporate polluters. 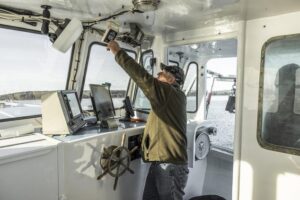 Kenneth “Skeet” Wyman on his lobster boat in Stockton Springs. Wyman and his crew fished at the mouth of the Penobscot River, until learning about the alarming rates of mercury. He had about 150-180 traps in the area, and he estimates that he faced losing 35,000 in profit per year due to the contamination.

Kenneth “Skeet” Wyman had been fishing for lobster and crab in Maine’s Penobscot River for three decades before the Stockton Springs resident learned just how badly the river was contaminated with mercury. “It sickened me to the core to think not only had I been feeding this to thousands of people in the community and all over but to my own family too,” Wyman says. “It was gut-wrenching.”

Scientists traced the problem back to the HoltraChem plant that sat on 235 acres alongside the Penobscot in Orrington, Maine, and produced chlorine and other chemicals for the state’s paper and pulp industry.

Beginning in 1967, it dumped up to 13 tons of mercury into the river rather than disposing of it responsibly as hazardous waste.

Mercury is a potent neurotoxin that’s especially harmful to the developing brains of children and fetuses; the Penobscot, meanwhile, is one of New England’s largest watersheds, and the river and its tributaries are major sources of shellfish and fish.

NRDC’s (Natural Resource Defense Council) involvement in the case dates back to April 2000, when it joined the Maine People’s Alliance (MPA) to file a lawsuit against Mallinckrodt US LLC, the successor to the plant’s first corporate owner, and brought the issue to the public’s attention. (The Orrington plant shut down its operations four months later.)

Now, more than 22 years after that intervention, an approved settlement, submitted to a federal district court in March 2021, has at last set in motion a cleanup plan, long-term monitoring, and funding for projects that would benefit the environment and communities affected by the pollution.

Importantly, the settlement also holds the corporation accountable: Mallinckrodt must pay $187 million, with an extra $80 million in contingency funds, to jump-start the Penobscot’s recovery. 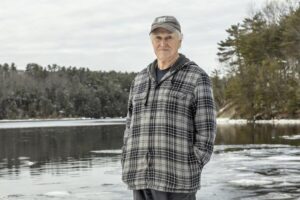 Richard Judd near his home on the shore of the Penobscot River in Orrington, just around a small bend from the HoltraChem plant at one of the most contaminated areas on the river.

The Penobscot meanders through the Maine woods on its way toward the sea, and the legal course to reach the settlement over the past two decades was as twisty as the river itself.

In 2002, Maine’s federal district court found Mallinckrodt to be liable for the pollution. Because the mercury presented an “imminent and substantial endangerment to public health and the environment,” the court ordered the company to fund an independent study on the extent of the contamination. (Mallinckrodt appealed, but a panel of judges upheld the ruling in 2006.)

That scientific assessment, conducted over nine years, confirmed elevated levels of mercury in the Penobscot River estuary, with surface sediment mercury levels 10 to 20 times higher than others in the region. The study also found high levels of mercury in wildlife, such as lobsters, black ducks, eels, and marsh songbirds.

In response to the findings, the state of Maine issued an advisory for pregnant women against eating waterfowl and, in 2014, closed down a seven-square-mile section of the lobster and crab fishery located at the mouth of the Penobscot. Two years later, after additional sampling found more contamination, the state put another five-and-a-half square miles off-limits.

The closures hit incomes hard in the local fishing industry. Even so, Wyman says he was grateful for them. “I’m glad that it didn’t linger on for another 20 or 30 years, because who knows what damage that would have created.”

The remediation actions being put in place are based on the recommendations by an engineering firm appointed back in 2016, following a second court ruling, to identify the best ways to address the pollution. The work includes the removal of the mercury through dredging or other excavation methods, the capping of the contaminated sediment, and the funding of other projects to benefit the environment.

Retired NRDC senior attorney Nancy Marks began developing the case against Mallinckrodt in 1998 and worked on it for the next 15 years. She says a cleanup—at least one of this magnitude—would never have happened without NRDC’s willingness to litigate it. “The mercury wasn’t going to clean itself up,” Marks says, adding that the case is an excellent example of people stepping in to hold polluters responsible when the government refuses.

And it was this empowerment of citizens that made the Penobscot case so unique. NRDC and MPA brought the 2000 case against Mallinckrodt as a citizen lawsuit under the Resource Conservation and Recovery Act (RCRA), the federal law that governs the safe management of hazardous waste. At the time, the move was a novel application of the statute, and the only case from which an ecosystem-level cleanup plan has ever emerged.

The ruling, explains Jared Thompson, an NRDC senior attorney who began working on the case in 2012, set a legal precedent, greatly expanding the scope of the types of remedies citizen groups can pursue under RCRA without government involvement. Since 2006, other cases have cited the Penobscot ruling 91 times.

“If we have these powerful tools in federal environmental laws but they’re never used, what good are they, really?” asks John Dieffenbacher-Krall, who was MPA’s executive director until 2005. “You can bet every regulated interest now knows about the MPA-NRDC suit.”

MPA brought indispensable local knowledge, resources, and voices to the case, all of which were pivotal in its successful outcome. “It’s a good reminder that this isn’t just an abstract scientific issue, but it’s a human issue as well,” NRDC’s Thompson says about hearing the testimonies of those who live and work along the river, many of whom are MPA members. “There are real people in real communities that have been impacted by the mercury contamination in the Penobscot estuary.”

For instance, in 1985, Richard Judd and his wife, Patricia, moved a half mile downriver from the HoltraChem plant with a plan to swim and fish—activities they never ended up being able to do.

“The more we learned, the worse it became,” he says, remembering the sight of huge open vats of mercury during a tour of the plant. Judd still kayaks and canoes on the Penobscot, but the experiences always give him pause. “It’s just gorgeous, but you get a different feeling when you’re out on a river that’s contaminated.”

Nancy Galland and her late husband, Richard Stander, have a similar story. In February 1998, they had recently finished building their small retirement home with 400 feet of Penobscot Bay frontage when they learned of a HoltraChem mercury spill. They had planned to farm mussels. They were so upset when they learned of the contamination that they lost sleep, Galland recalls. Soon after, the couple organized a demonstration outside of the plant.

“That started the ball rolling,” she says. They went on to form the Penobscot Alliance for Mercury Elimination the following year, which helped bring fellow residents together to get their voices heard. 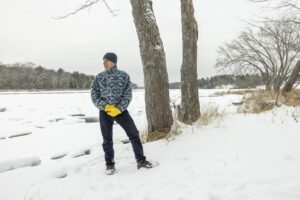 John Banks is a member of the Penobscot Nation and recently retired the tribe’s director of natural resources. The tribe manages a series of islands upriver and inland from the contamination site, and the fish, birds, and other plant and animal depend on the health of the river’s entire ecosystem.

Members of Penobscot Nation, from whom the river takes its name, have perhaps felt the impacts of the contamination most acutely. In addition to fighting big polluters, removing dams, and helping to restore the river’s water quality and fisheries, they voted in 2018 to make the Penobscot River a citizen, viewing it as a relative with fundamental rights.

Tribal member John Banks, who until his recent retirement was the tribe’s director of natural resources, says the Penobscot River watershed has always been spiritually, socially, and economically important to his people. “It was our life source. For thousands of years, it provided a means for the tribe to sustain itself. And our history, traditions, and cultural identity are very much intertwined with it,” he says.

But with colonization and the subsequent industrial revolution, the health of the river—along with that of the wildlife and people who relied on it—began to suffer.

In a comment she submitted in October to a fairness hearing about the consent decree to settle the case, Tribal Ambassador Maulian Dana wrote “[T]he pollution has taken a toll on the vitality of our people. We have sustenance fishing rights but cannot live on the fish. When I was a child, the river was thick with foam, had an odor at all times, and if you swam in it, your clothing would be stained and skin would break out.” She continued, “We have fought back and breathed a lot of life back into the river through tribal efforts and collaborations with other entities. We cannot afford to go backwards.”

While the Penobscot victory is a huge testament to the power of people over industrial polluters, Thompson says it’s a bittersweet one—because so much damage has already been done and there is no perfect fix. Still, he hopes the precedent that the case has set will help prevent pollution from happening elsewhere.

For his part, Wyman continues to fish in Penobscot Bay but doubts that he’ll ever fish the river again. However, he finds comfort in the idea that future generations might. “They should have the same opportunities that we all once had,” he says. Similarly, Judd, a retired University of Maine professor, doesn’t think he’ll get to experience a clean river in his lifetime. But he, too, has the satisfaction of knowing that other people will eventually enjoy the Penobscot in ways that he couldn’t.

MPA’s Dieffenbacher-Krall also expresses a sense of pride with this long-fought win. “But it’s not for our egos,” he says. “It’s for justice, it’s for a clean river, it’s for the principle that private interests don’t get to despoil resources that belong to everyone.”

NRDC’s Bernard agrees. “It feels like justice is finally being done. And that’s a big part of why we litigate—to generate justice.”

All photos courtesy of Greta Rybus for NRDC.

This article by Nicole Greenfield originally appeared on the website of the Natural Resources Defense Council. Reprinted here (with minor edits) by permission.