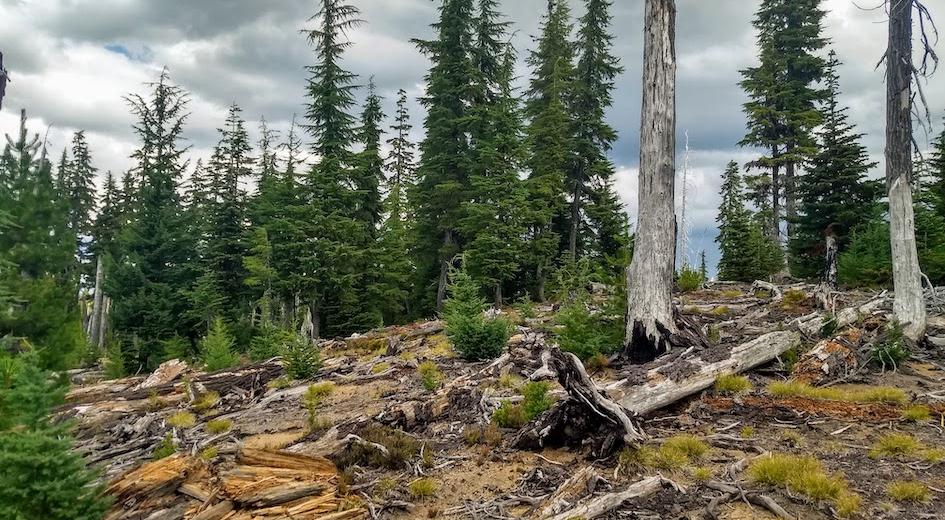 Thanks to the climate crisis, high-elevation forests in the Central Cascade mountains of the U.S. Pacific Northwest are burning more frequently and expansively than in the recent past.

This is prompting researchers and fire managers to question whether forests will be able to recover from these emerging fire patterns and whether they will require human assistance to do so. 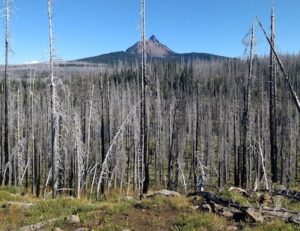 Mt. Washington, Oregon: A fire refugia patch is visible in the center of the frame.

A new study by Portland State University researchers characterizes the role of fire refugia—the green islands of live trees that remain after forest fires—in forest regeneration following large and severe fires in the High Cascade mountains of Oregon and Washington.

The results of this study can help determine when human intervention in the form of tree replanting is warranted, when it isn’t, where replanting efforts should be targeted and what species should be prioritized.

This is important to know since replanting can be expensive and overstocked forests with abnormally high tree density and/or with tree species that are available in nurseries can reduce habitat quality or pose a compounded future fire hazard.

Sebastian Busby, former PSU PhD student and current postdoctoral researcher at the U.S. Forest Service, and Andrés Holz, associate professor of geography, conducted the study, which was published in Frontiers in Forests and Global Change.

“To a great extent, these fire patterns in high elevation forests are occurring due to climate change,” says Holz. “After the fires, these green islands that we term refugia may be the last bit of hope we have for the forests to recover naturally.”

Forests in the High Cascades may have historically burned only once per century (or even less frequently) due to a wet and cold climate. As the climate has continued warming, some areas have burned two or more times over the past twenty years, with individual and/or repeated fires severe enough to wipe out the vast majority of trees across large expanses of forest. 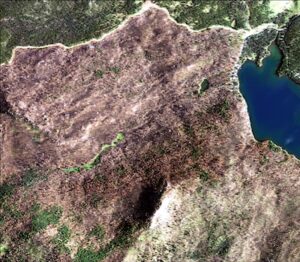 In this study, Busby and Holz used a combination of satellite imaging and field work to determine how different characteristics of fire refugia affected their ability to regenerate the surrounding forestland.

The researchers found that certain characteristics of refugia led to more tree regeneration.

For instance, refugia with taller and presumably older and larger trees increased tree regeneration and certain species, like mountain hemlock, were able to disperse a greater quantity of seeds further into burned areas, leading to much higher tree regeneration when compared to other species, like subalpine and Pacific-silver firs.

“This tells us that fine-scale refugia composition and structure are important and can stimulate very different post-fire forest regeneration responses,” says Busby.

“Those give us a sense, for any given spot on the landscape, roughly how many seeds are making it there and how much tree regeneration is likely to occur,” says Busby.

When predicting natural tree regeneration across burned landscapes, the researchers found that considering both the proximity to and density of fire refugia was extremely important, as well as how those attributes interacted with local environmental and climate conditions. In particular, cooler and wetter (mesic) conditions after fires enhanced tree regeneration while hotter and drier (arid) conditions inhibited regeneration.

“This means that under particularly mesic conditions, like those observed in many areas of the High Cascades, artificial replanting of trees post-fire may not only be an unnecessary waste of resources but can lead to overly dense forests that are at higher risk of mortality from drought, insects and fire, especially under a warming climate,” says Busby. 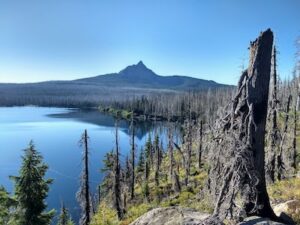 In fact, the results of this study suggest that some earlier replanting efforts may not have been needed, such as a 2010 replanting at the site of the 2008 Gnarl Ridge Fire on Mt. Hood.

“That was probably unnecessary,” says Busby. “What we saw in the field and modeling work that we did suggest that the natural regeneration in that area was sufficient, and it’s possible the replant has compounded tree density in a negative manner for forest resistance to fire, drought, insects and pathogens.”

Results and techniques from this study can now be used by forest managers as a new tool to pinpoint where natural tree regeneration is likely or unlikely to occur after fires. This will prevent overplanting, which can be needlessly expensive and actually place forests at increased risk of future fires.

“Failing to think about that can lead to negative unintended consequences,” concluded Busby. “The forest may grow up to be super dense and if a fire occurs, it’s more likely to spread quickly and burn severely.”

All photos by Sebastian Busby, unless otherwise credited.