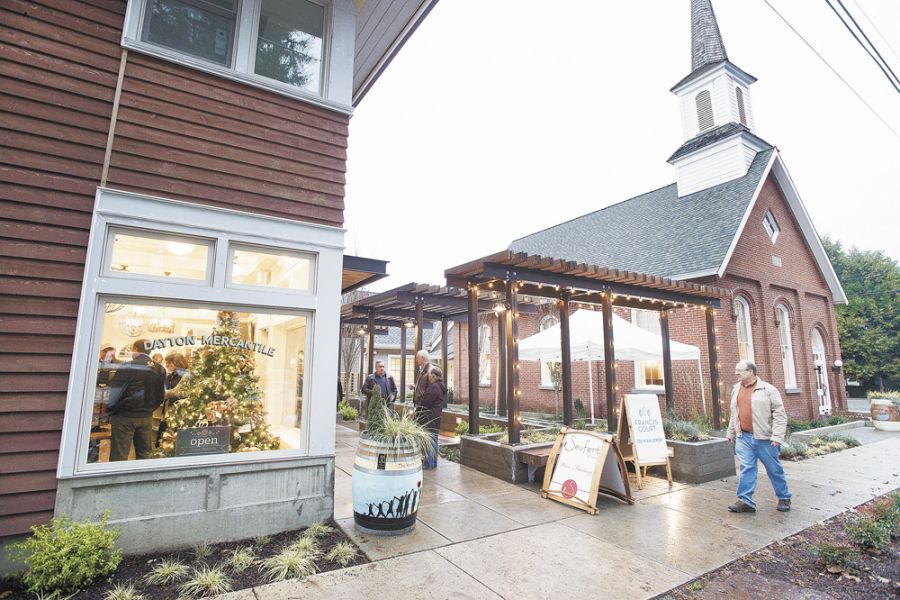 In 1886, the stately brick First Baptist Church was built in Dayton, Oregon. Standing empty in more recent years, its total renovation has made it the centerpiece of a major redevelopment project. 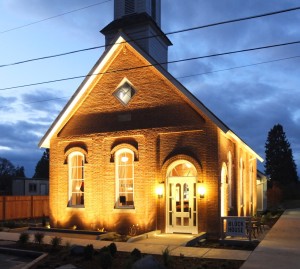 Close to 100 years after the church was built, the Baptist congregation had outgrown the building and sold it to a private party. For the next 20 years, the old church briefly housed a small ice cream shop, but was mostly used as a residence as it continued to deteriorate.

In 2007 Bill Stoller purchased the property as part of a plan to restore some of downtown Dayton’s historic properties as part of a larger community revitalization strategy. Stoller and property manager Kelly Haverkate engaged the services of preservation architect Paul Falsetto, and in 2013 a plan was born to rehabilitate and adaptively reuse the church to create a new home for the locally popular Block House Cafe.

This move would allow for a wonderful new use for the building, give the cafe a great venue, and allow for future rehabilitation of the historic building the cafe previously occupied.

Today the Block House Cafe brings life back to this beautiful old building that graces downtown Dayton. The cafe is open for breakfast and lunch. They have a very loyal local following and are fast becoming known to out-of-area visitors for their hometown ambiance and delicious comfort food.

Mayor Beth Wytoski noted Dayton has come a long way in recent years in reversing a long economic slide due to detrimental developments in the farming, food processing and shipping industries.

“We have master plans in place for all the city’s operations, like parks and water,” she said. “And we’re working hard to improve streets and sidewalks. We are well ahead of many other cities.”

Wytoski went on to cite the city’s purchase of 60 acres of adjacent farmland to augment the municipal water supply while providing rental income.

That’s not to mention the city’s most noteworthy accomplishment in recent years — acquisition of the old Masonic Lodge to serve as a community center.

On a soggy December morning, trucks bearing the logo of Fackler Construction Company lined the north side of Courthouse Square Park in downtown Dayton, Oregon.

Although not peak construction season, workers were racing to finish Francis Court, a two-story building featuring new tenant Seufert Winery, two upstairs apartments and Dayton Mercantile, already in operation. Plans called for a grand opening the following afternoon, a formality this small town in Yamhill County wine country is getting used to.

Dayton is on the move, poised for growth and a revitalization of its downtown core.

“It’s a very exciting time for our little town,” said Kelly Haverkate, the coordinator for the Dayton Community Development Association. “We love to share it.”

With the collection of recently added but already-thriving businesses — The Barlow Room restaurant, Archie’s Ice Cream & Eatery and the Locally Picked antique store — surrounding the city’s popular park, it might be easy to think the growth spurt is nearing the finish line.

Yet the Stuckey Building, a two-story brick building that housed a family-owned grocer until a few years ago, remains empty, awaiting its own new tenants and revival.

This is only the beginning.

The City of Dayton was established in 1850 as a river port on the Yamhill River. Located in Oregon’s Yamhill Valley “wine country,” they have a strong agricultural heritage and have always been a hub for area farmers.

One of the special features of Dayton is a beautiful central park surrounded by downtown business blocks. Th e Courthouse Square Park was donated in the unfulfilled hope the county seat would be located there. Downtown property and business owners are invested in creating an economically vibrant community and a unique destination for visitors based on their history and heritage.

One of the challenges facing Dayton is a very small economic base which means they need to reinvent themselves to make the most of their assets. Their desire to “do it well” led them to apply for the Oregon Main Street program in 2009 to give them the structure to organize their revitalization efforts. After creating the Dayton Community Development Association, a 501c3 nonprofit organization, the board held a retreat with Oregon Main Street staff to determine strengths and weaknesses and establish goals and objectives.