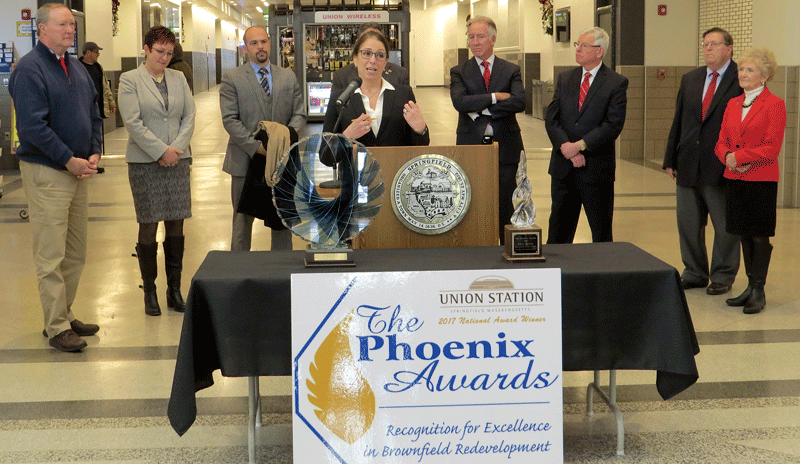 When the Phoenix Awards were announced at the 2017 National Brownfields Training Conference in Pittsburgh, Pennsylvania in December of 2017, the Union Station revitalization project in Springfield, Massachusetts was the winner, making it the year’s best example of brownfield redevelopment in the United States.

U.S. Rep. Richard E. Neal (D-Springfield) was the driving force behind the station’s $95-million rehabilitation into a modern intermodal transportation hub. “Thank you to the Environmental Protection Agency, MassDevelopment and the Pioneer Valley Planning Commission for their work in securing this impressive award for Springfield Union Station,” said Neal. “The opening of Union Station earlier this year was the culmination of decades of hard work. I am thrilled to see this very special project receiving such prestigious national accolades and am proud to be part of its success story.”

Kevin Kennedy, Springfield’s chief Development officer, says the $95 million could not have come to its successful conclusion without the ongoing remediation funding from the Environmental Protection Agency (EPA). He means it not only from a construction standpoint, but also from the standpoint of momentum: the continuing remediation maintained peoples’ confidence that the project was really going to happen.

Indeed, there were several times over the past few decades when the Union Station project was stalled, even dead in the water. But it was progress with the environmental issues that kept the project relevant and put it, well, back on track.

“Back around the turn of this century, there was a start to this project, and then it stopped,” Kennedy recalled. “We had to figure out in 2007 and 2008 how to restart the project, and there were two very important funding sources that enabled us to get things restarted.” 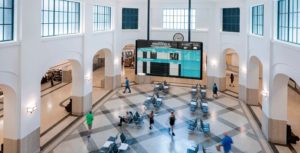 The first was a $350,000 planning grant awarded by then-Governor Deval Patrick that enabled the city to hire an architect to start the process of organizing the project, and the second was a roughly $250,000 EPA assessment grant to be used to identify to scope of the environmental issues at the site, including the baggage building and Hotel Charles footprint.

The Springfield Redevelopment Authority owns the building and managed the redevelopment. The lead contractor was Daniel O’Connell’s Sons, and they worked with a number of vendors to remediate the contamination.

During FY2017, MassDevelopment financed or managed 377 projects generating investment of more than $4 billion in the Massachusetts economy. These projects are projected to create about 9,488 jobs and build or rehabilitate about 1,863 residential units.