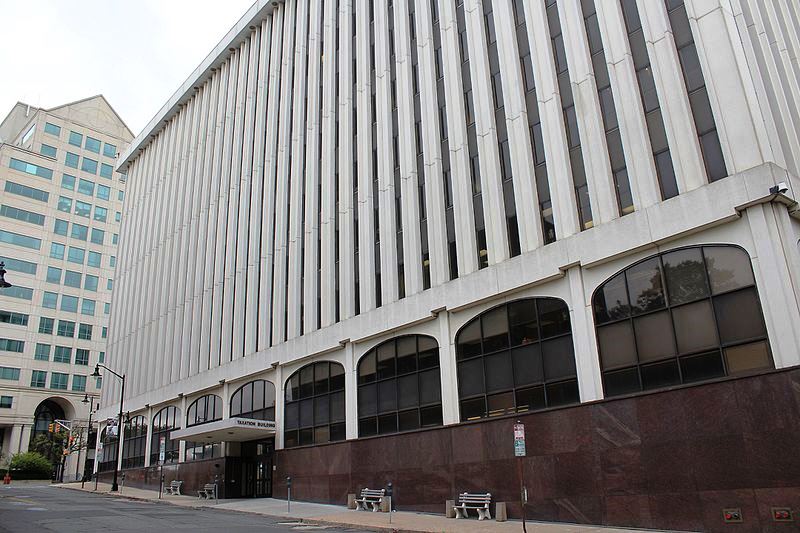 After more than 50 years as home to the New Jersey Department of the Treasury‘s Division of Taxation, the prominent ten-story, 230,000 square foot office building at 50 Barrack Street, in the heart of downtown Trenton, New Jersey is ready for new life.

On November 15, 2021—on behalf of the Treasury Department—the Capital City Redevelopment Corporation (CCRC) issued a request for offers to purchase and redevelop the spacious former Taxation building, located at the corner of W. State and Barrack streets with expansive views of the Delaware River.

“With its prime location and promising redevelopment potential, the former Taxation building is ready to be a part of Trenton’s ongoing revitalization,” said State Treasurer Elizabeth Maher Muoio.

“This project is a great example of the type of collaboration that was envisioned when Governor Phil Murphy established the State Capital Partnership. Treasury has been working closely with the CCRC, the City of Trenton, the New Jersey Economic Development Authority, and local stakeholders in readying this building for new life. We stand ready to work with the next occupants to ensure that the rebirth of this building is not only successful, but comports with the overall vision of the many who call Trenton home,” she added.

The property is situated on over half an acre of land, just steps from the State capitol, adjacent to many of Trenton’s historical and cultural attractions, and within walking distance to the Trenton Transit Center, which is served by Amtrak, New Jersey TRANSIT, the light rail River LINE, and Southeastern Pennsylvania Transportation Authority (SEPTA).

“With its strategic location, redevelopment of the former Taxation building has the potential to uplift downtown Trenton in terms of job creation and the ancillary benefits it will provide for existing downtown businesses,” said Lieutenant Governor Sheila Oliver, who serves as Commissioner of the Department of Community Affairs. “We’re pleased to see the State Capital Partnership working exactly as it was intended – harnessing state support to fuel Trenton’s revitalization in a collaborative fashion.”

The CCRC is responsible for the planning and promotion of development within the Capital District of downtown Trenton. Given the property’s location, the building is ideally suited for continued office operations, bringing jobs and supporting vibrant activity in the downtown community. The CCRC is seeking a developer looking to revitalize the building primarily for office use, and offers that include office and complementary uses are welcomed.

“Trenton’s Capital District has so much to offer, from its flourishing arts scene to its proximity to mass transit and major highways,” said CCRC Chair Peter Inverso. “Part of the CCRC’s mission is to ensure redevelopment in the district benefits the greater Trenton community and furthers our goal of bringing new life into the capital city. This building presents a worthwhile opportunity to bolster our growing business community and be a part of Trenton’s renaissance in the making.”

The property currently features 40 existing parking spaces located in the onsite garage. It also contains a substantial amount of furniture, which respondents are allowed to bid on, if interested.

The minimum purchase price offer that will be accepted for the property is the appraised value of $1,790,000. Up to $4.5 million in grant funds may be available to the selected respondent at the discretion of the CCRC. The eligibility requirements for the grant funds can found in the request for offers to purchase and redevelop the property. Additionally, the building is located in an area eligible for NJ Economic Recovery Act incentives, which include financial and logistical support from the State. Information on NJ Economic Recovery Act incentives can be found online here.

The redevelopment of the property is a collaborative effort guided by the State Capital Partnership, which was established in 2018 by Governor Phil Murphy through Executive Order No. 40 in order to harness state support and resources to spur economic development in Trenton and help chart a new course for New Jersey’s capital city. The State Capital Partnership consists of a number of integral State agencies, the City of Trenton, and Mercer County and is designed to better coordinate and align resources in support of Trenton’s revitalization. The Partnership is overseen by the State Treasurer’s Office in coordination with the State Department of Community Affairs.

The Capital City Redevelopment Corporation is a State authority, in but not of the Department of the Treasury, that was created by statute to plan, coordinate, and promote public and private development within the Capital District, which consists of portions of downtown Trenton that serve as the commercial center of the community where public buildings and historic sites are located.

While the search for a new owner is underway, Treasury will continue to operate and maintain the building.

See complete details on the request for offers to purchase and redevelop the property.