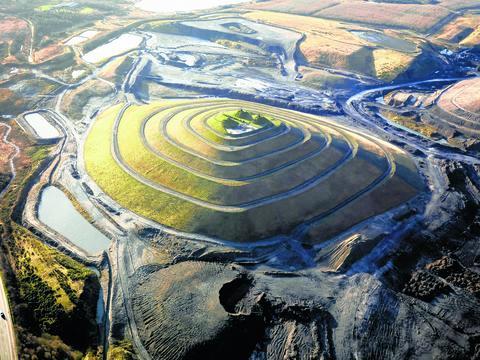 Fife is a council area and a historic county of Scotland, located between the Firth of Tay and the Firth of Forth, with inland boundaries to Perth, Kinross and Clackmannanshire. It is widely held to have been one of the major Pictish kingdoms, known as Fib, and is still commonly known as the Kingdom of Fife within Scotland.

The town of Oakley is the site of an ugly, abandoned coal mine called Blair House. Now, The Fife Council has achieved a major success in their long effort to restore the site to “woodland, countryside and agricultural use.”.

That effort included a lawsuit. The council took legal action following the ending of mining at the Blair House site in November 2013. It had entered into an agreement with UK Coal Mining, the mine’s owners, that within one year of production ceasing, the site would be restored. The mine was then taken over by Scottish Coal, which assumed responsibility for returning the site to its original condition.

On October 18, 2017, Fife Council secured over £3.1 million from the Royal and Sun Alliance Insurance PLC to restore the opencast coal site near Oakley, having settled its lengthy legal battle out of court.

Councillor Alice McGarry, Convener, South West Fife Area Committee & Planning Committee, said: “This is a great outcome for the environment, and for the residents of Oakley and surrounding areas. In the coming months, Fife Council will work with the current site owners, MRL (Mines Restoration Limited), and the local Community Councils, to finalise the restoration plan and remove this unsightly and potentially dangerous site from the countryside.”

This is a significant step forward for Fife Council in improving the local environment. The site had been left in a derelict state when the Scottish Coal Company went into liquidation in April 2013, prompting fears around the future use and safety of the site.

Fife Council have recovered the full amount of the restoration bond which will now allow plans to restore the site to progress.

SMRT chairman, Professor Russel Griggs OBE, said: “This is a very positive development for the future of Blair House and has the potential to have a significant impact on the site and the surrounding community.”

“Our objective has always been to deliver a pragmatic approach to restoration. We’re looking forward to working with all of the stakeholders involved to help facilitate a sustained programme of activity, which will incorporate significant land and environmental works. We are committed to working with Fife Council and the local community councils involved to finalise a restoration plan that makes best use of the available funds to improve the environment for local people.” he continued.

The Scottish Mines Restoration Trust (SMRT) works with communities and other stakeholders involved in the opencast mine restoration process, to address the issues left by unrestored opencast sites where coaling has ceased.

Councillor Altany Craik, Convener, Economy, Tourism, Strategic Planning & Transportation Committee, said: “I am delighted at this news and look forward to the restoration of the Blair House site beginning as soon as possible. Fife Council’s Legal and Planning teams have worked tirelessly over a number of years to secure this victory, which means that all three of Fife’s opencast coal sites that were abandoned when the market for coal collapsed now have restoration budgets.”

“St Ninians at Kelty has been restored and is in aftercare, the remediation of the Muir Dean site at Crossgates is nearing completion, and now we have much-needed funding to achieve the restoration of Blair House. This legal victory means that there will be no lasting environmental legacy in Fife arising from the coal market crisis of 2013,” he concluded.

The Scottish Mines Restoration Trust was established to help facilitate the process of communities and other stakeholders in restoring open-cast coal sites across Scotland, and to create viable restoration plans for the sites.

An independent non-profit making organisation, the Trust’s role is to offer advice, expertise and where appropriate funding to facilitate the plans for restoration of derelict sites.

Note from Storm: Of course, it shouldn’t require years of lawsuits to get insurance companies to hand over the bond funds, and they should be made to pay significant damages when they try and fail to resist paying out.

Worldwide, restoration bonds should be implemented where they aren’t already required, and the amounts should be significantly increased in the nations where they are. In the United States, the Mining Act of 1872 authorized prospect and mining for economic minerals, such as gold, platinum, and silver, on federal public lands.

Unfortunately, whether due to government corruption or ineptitude in the Republican administration of President Ulysses S. Grant, it allowed private companies to take resources owned by the public without compensation. Worse, it allowed them to leave the sites in an ugly, toxic condition, so that the public had to pay for restoration.

Restoration bonds have gone a long way towards ameliorating this horrendous situation, but they often don’t fully cover long-term restoration costs. Worse, both mining companies and their insurers have developed a broad suite of legal mechanisms to avoid fulfilling their obligations. Hopefully, this victory in Fife will lead to more dire legal and financial consequences for such behavior.

Photo of opencast mine in Fife by anonymous.