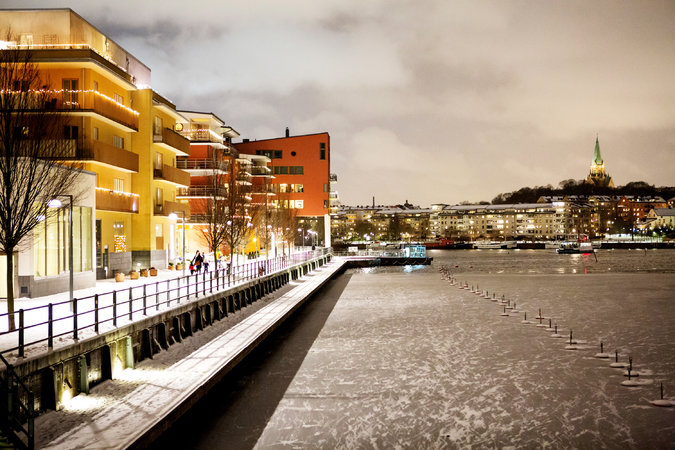 The waterfront district of Hammarby Sjostad, on the southern edge of Stockholm, Sweden, has been heralded as a model of sustainable urban development, a place where one can already glimpse the future of city living.

And the area’s growth, coupled with the steadily rising popularity of the island of Sodermalm to its immediate north, is pulling the inhabitable boundaries — if not the heart — of Stockholm southward.

Located along the Hammarby waterway, this newly built, eco-conscious neighborhood had previously been home to landfills and industry, dense with factories and office buildings. But then a plan was conceived to build housing for athletes as part of an ultimately unsuccessful Olympic bid in the 1990s, and the area was soon transforming.

“We had started this with great ambitions, and we just kept going with the project,” said Martin Skillback, the project manager for the city’s development administration office, of the planned residential district.

Today, about 10,000 apartments have been built, and over 30,000 Stockholmers will call Hammarby Sjostad home by the project’s estimated completion date, in about five years. Thanks to bike lanes and convenient ferry, bus and tram links, 80 percent of residents commute without the use of cars, a figure that’s slightly higher than average in a city already full of energy-efficient construction.

Seven years ago, Allan Larsson, a retired journalist, former finance minister and past president of Lund University in southern Sweden, moved with his wife from central Stockholm to Hammarby Sjostad, only minutes away by car, bike or rapid transit, drawn by the public transportation options, nearby nature and conscientious environmental aims.

Shortly thereafter, he started a citizens’ initiative, HS2020, to further improve the area for residents, who are in some ways living in an urban experiment.

“We’ve used the phrase ‘renewing a new city’ to highlight the fact that you can’t just build a new residential area or a town and then leave it,” Mr. Larsson explained. “It has to be updated. You have to have innovation. You have to test new things.”