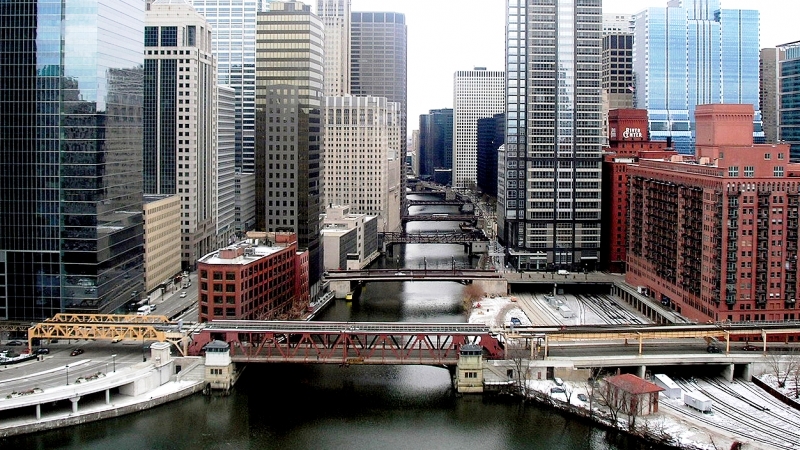 In downtown Chicago, Illinois, rowing crews in their sleek boats slice through the murky water of the Chicago River, as the sun sets on the defunct century-old coal plant rising above.

It’s not a natural river, by any means. It’s actually a conglomeration of human-created and (some) natural waterways, built over a century ago, when civil engineers reversed the flow of the river.

The purpose of that trick was to dump their sewage into waterways leading to the Mississippi River, thus keeping the filth out of the city’s water supply in Lake Michigan. And dump they did: not just raw sewage, but massive quantities of toxic industrial waste.

These rowing teams have practiced on the river for more than a decade and once felt like aquatic urban pioneers. But now an increasing number of paddlers and pleasure boats ply the river, as diners, joggers and bikers enjoy it from the banks.

The river’s water is cleaner than it has been in decades. New amenities, including four new boat houses, riverside restaurants, plus the lovely and popular Riverwalk, a pedestrian promenade that line its downtown banks.

Revitalizing the river was a major priority of the city’s notoriously-aristocratic former mayor, Rahm Emanuel, who left office on May 20 of this year.

“We’re now closer to fulfilling Daniel Burnham’s dream of a two-waterfront city than ever before,” claimed Emanuel, in reference the great 19th-century urban planner who designed some of the city’s grand buildings. “I made the river a park for the city . . . It’s become fully present in city life.”

But many see the river through a lens often invoked in Chicago: as a tale of two cities, where the majority-white, wealthier North side has flourished while the lower-income, largely black and Latino South side languishes.

The spot in the river where the rowers launch could be seen as the dividing point between the two sides of the Chicago River system. Just upstream is a lush park with a Chinese pagoda, and beyond that, the skyscrapers of downtown.

Downstream, the river becomes increasingly industrial and filled with detritus — bloated dead animals, floating condoms and tampons — reminders that this waterway is made up largely of treated or sometimes untreated wastewater.

One organization working to correct this situation is the Little Village Environmental Justice Organization (LVEJO), which was founded in 1994 by public school parents who learned about the potential exposure of their children to dangerous particles during school renovations at Joseph E. Gary Elementary School. After forcing the school administration to change their plans, these parents turned their attention to other issues of environmental justice in Little Village. The Chicago River (and other waterways) is one of them.

Here’s what LVEJO’s website says about one of their areas of concern: 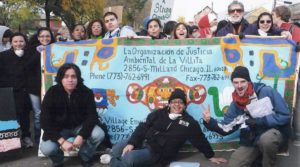 The Pilsen-Little Village River Corridor Project was established in 2014 to develop a master plan that will result in a healthier, more accessible Chicago Sanitary and Ship Canal corridor from Bubbly Creek to west of Pulaski Road on Chicago’s southwest side. It is the goal of this project not only to improve the environmental quality of this section of the Chicago River System, but to elevate it to a cherished public amenity.

Haunted by a complex history of contamination and neglect, this 3.3 mile reach of river is also impacted by present day pollution from combined sewer overflows, storm water runoff, permitted industrial inputs, and a lack of public open space. Despite these challenges, the river, which is bordered by Bridgeport, Pilsen, Little Village, Brighton Park, Archer Heights, McKinley Park, and South Lawndale, presents a great opportunity for revitalization and community enhancement.

A long term plan that results in clean water, capping or removing toxic sediments, eliminating odors, improving native landscapes, creating fish habitat, and developing open space would make the river safer for people and wildlife, and connect the river to the community.

The intent of this project is to view this long segmented section of the river as a single unit. This section of the river can serve as the organizing principle around which we may consider how to creatively establish a healthy recreational corridor, eventually bringing the same kind of attention and investment to it that other reaches have received. The project area starts at Bubbly Creek with Park 571 and Canal Origins Park and continues downstream to include the Canalport Riverwalk, the Richard J. Daley Boat Launch, the recently shuttered Fisk and Crawford sites, Parcel S, Park 553, the Collateral Channel and any other open spaces that can become part of the amenity mosaic.

Considering the recent announcement by the City of Chicago to invest over $100 million in a downtown river-walk project, the time is ripe to address the remediation of the water and revitalization of the riverfront properties adjacent to the Chicago Sanitary and Ship Canal and even consider renaming it. Our goal is to ensure that the wider public is aware of its environmental condition, the need for access to riverfront public spaces for healthy recreation and leisure activities, and that they know they can be a part of the solution by advocating for change.

Featured photo of the Chicago River by DDima via Wikimedia Commons.

See full article by Kari Lydersen in the Washington Post.