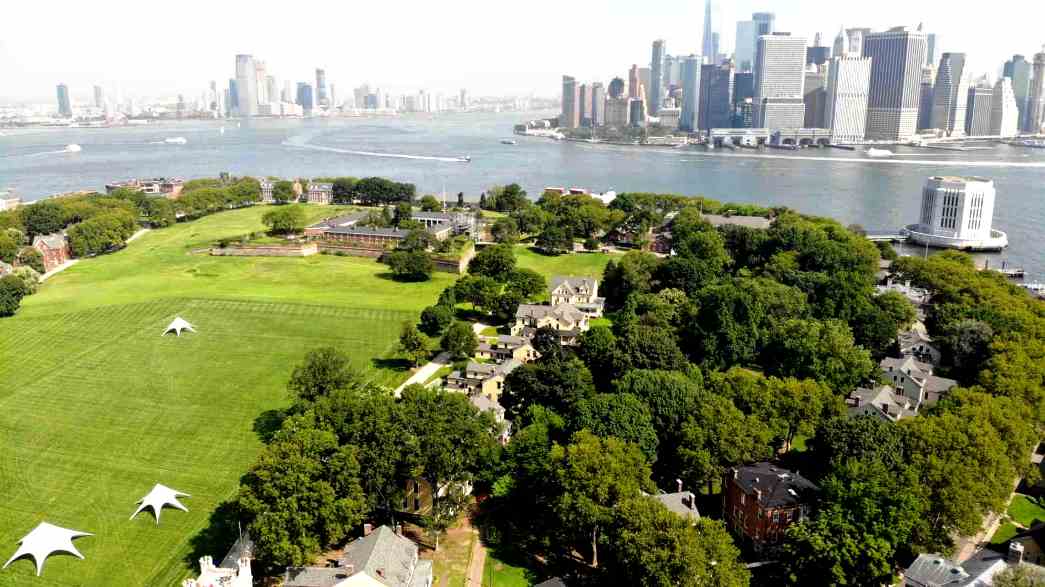 We’ve reported on the fascinating ecological restoration, climate resilience and economic revitalization work going on at the former military base of New York City‘s Governors Island for many years, here in REVITALIZATION. So, we’re now happy to announce even more progress.

On February 2, 2021, the Trust for Governors Island announced four new tenants are taking space in the Island’s historic district. One of them is the leading-edge environmental restoration organization, Billion Oyster Project. The other three are Shandaken Projects, the Institute for Public Architecture and Beam Center.

All were designated as tenants following a public RFP process seeking artistic, cultural, environmental and educational tenants released in March 2020. The new tenants will occupy three buildings in the historic Nolan Park area of Governors Island on a year-round basis.

“One of the many things that makes Governors Island such a unique amenity for New York City is the vibrant mix of arts, educational, leisure and scientific uses that visitors can explore,” said Deputy Mayor Vicki Been. “These new year-round leases further that mix and advance our goal of 24/7/365 activation that will culminate with the climate hub we plan to bring to the Island as a part of the City’s recovery efforts. These four tenants will be a fantastic addition to Governors Island’s cultural ecosystem!”

This announcement represents a key milestone as part of the Trust’s ongoing strategy and vision to reactivate the Island’s nearly 1.3 million square feet of historic buildings, and an important step in moving towards making the Island a year-round public destination with expanded educational, non-profit and commercial tenancies.

“New Yorkers already enjoy Governors Island in the warmer months – and the beautiful open space that makes this island so special is here to stay. But taking full advantage of our city’s space means getting more from Governors Island year-round. Today’s announcement does just that,” said Mayor Bill de Blasio. “These organizations will shape the island’s future as an arts, cultural, and scientific destination for generations, and I can’t wait to see how they use their space.”

“Manhattan Community Board 1 is excited to welcome the new, year-round non-profit tenants to Governors Island,” said Tammy Meltzer, Chair of Manhattan Community Board 1. “The Billion Oyster Project, Beam Center, the Institute for Public Architecture and Shandaken Projects will enliven the island with generational diversity and equity. We are delighted to see progress towards our mutual goals for year-round tenants, prioritizing activation of the historic buildings and expansion of public programming through incredible art and cultural organizations.”

These days, Nolan Park is home to a successful seasonal cultural program, with nearly two dozen organizations reusing the historic former military homes as programming space and workspaces for cultural practitioners and artists.

“This is a game-changing opportunity for the IPA to fulfill long-held aspirations dating to our founding in 2009, specifically, to establish a residency campus for architecture, planning and design practitioners connected to the urban lab of New York, but within a contemplative immediate setting. We look forward to adding to the vibrancy of the Nolan campus with our robust public presentations, open studios, exhibitions and workshops,” said Jonathan Kirschenfeld, Institute for Public Architecture Founder.

Over time, the Trust envisions expanding this successful seasonal model and shifting Nolan Park towards a year-round, multi-tenant campus for cultural research, presentation and public engagement.

“With the announcement of new non-profit tenants within Nolan Park, Governors Island is poised to serve as an even greater hub for cultural exploration, research and public programming,” said Clare Newman, President and CEO of the Trust for Governors Island.

“Already home to a successful hub of artistic and cultural activity during the summer months, the addition of Beam Center, Billion Oyster Project, IPA and Shandaken Projects to the Island’s growing community of year-round tenants represent an exciting milestone for our vision to anchor arts and culture in the Island’s continued growth and restore our treasured historic buildings,” she added.

All tenants announced today will include open hours and programming accessible to Island visitors during its growing public season.

“This new location on Governors Island enables Beam Center to offer all young New Yorkers a chance to experience and explore collaboration, learning and wonder through the power of making big things together. We are thrilled to join the island’s vibrant creative and cultural community,” said Cassie Broadus-Foote, Beam Center Director of Development and Planning.

Located within the Governors Island Historic District, Nolan Park is a collection of twenty 19th century houses, formerly used as residences by military officers and their families during the Island’s nearly 200-year use as a U.S. Army and, later, U.S. Coast Guard base.

“Inaugurated in 2014, our unique IPA Residency Program has up until now been organized as a ‘mobile,’ neighborhood-based program that offers participants the venue for collaborative research, design work and public programming. The year-round opportunity offered at the Governors Island Block House will allow us to expand upon this eight-week immersive studio by offering 5-to-10-month residencies to practitioners, scholars and students from around the world,” added Nadine Maleh, IPA Acting Executive Director and Board member.

Limited spaces within Nolan Park were made available through a Request for Proposals issued in March 2020. Proposals were evaluated based on alignment with the Trust’s vision to infuse the Island with dynamic cultural programming, emphasis on public participation, and more. This RFP represents the first time buildings within Nolan Park will be utilized year-round since the U.S. Coast Guard departed the Island in 1996.

“Shandaken Projects’ new programs in Building 9 will build on two immensely successful cycles of year-round artist residencies on the Island, which delivered free studio space to twelve artists, and many talks, performances, and artist projects to the public. We are looking forward to deepening our relationship with the Island and its non-profit partners, and offering a unique resource to their creative constituents in collaboration with the Hunter MFA Program,” said Nicholas Weist, Shandaken Projects Director.

As part of the RFP, the Trust will undertake a gut renovation of Building 20 for year-round use. Over the coming years, The Trust plans to undertake renovations of additional Nolan Park buildings to make them suitable and accessible for year-round occupancy by non-profit cultural tenants and public programming.

“These tenancies will fill the Island’s beloved historic district with new life and activity,” said Merritt Birnbaum, Executive Director of the Friends of Governors Island. “To see artists, teachers and students of all ages occupying these buildings year-round, engaging with each other and with the public, is an enormous step for Governors Island’s deepening role as a resource for our entire city.”

Governors Island has undergone a tremendous transformation over the last decade, including a $400 million investment in Island-wide infrastructure and the creation of a resilient 43-acre park. The Island is home to a diverse number of year-round tenants, including the Urban Assembly New York Harbor School, a public high school with over 500 students that offers career and technical education in marine and environmental careers; the Lower Manhattan Cultural Council Arts Center, an artist residence program that functions as a public gallery space during the season and completed a 40,000 square foot renovation last September; and QC Terme, a destination day spa that is currently under construction.

The Trust is currently pursuing a revitalization strategy centered on open space and recreation, arts and culture, and climate solutions to advance its mission.