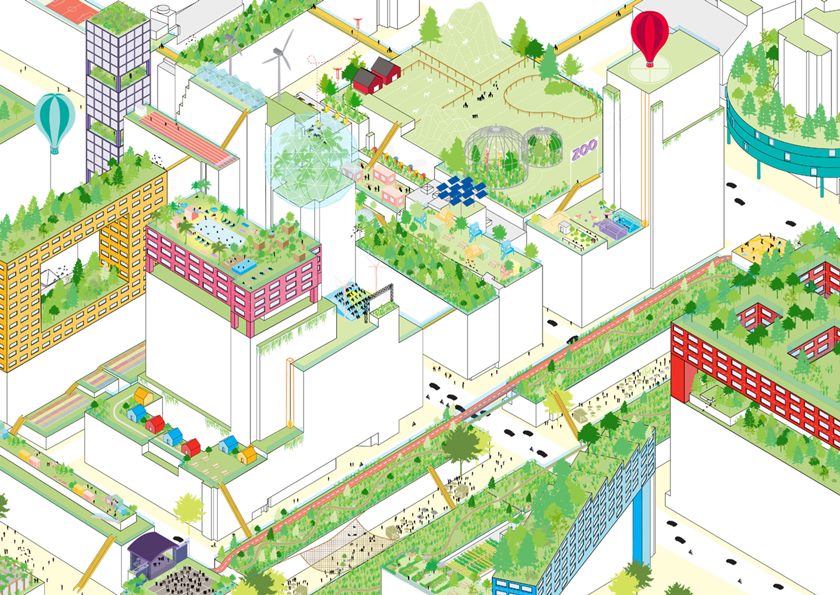 In the Netherlands, Rotterdam has 18.5 square kilometers (7.4 square miles) of mostly empty flat roofs. Why has the city only repurposed a limited number of roofs, when there is so much potential in doing so?

To address this topic, the City of Rotterdam commissioned MVRDV and Rotterdam Rooftop Days to produce a catalogue of 130 innovative ideas to make use of the city’s roofs, giving rise to a fantastic new phase of redevelopment in Rotterdam. 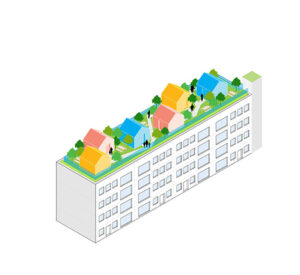 Rotterdammers are increasingly becoming used to seeing green roofs and even rooftop forests, thanks to the completion of MVRDV’s Depot Boijmans Van Beuningen. Yet flat roofs can be used for much more, for example storing water or as an event space. The Rooftop Catalogue offers an inspiring overview of no less than 130 different possibilities, from personal offices to sports fields to a cemetery.

The Rooftop Catalogue shows how roof use can be a solution for the scarcity of space in the city and how it can help to prevent the city from expanding outwards into rural areas. The book aims to inspire people, showing why we should take to the skies and how reprogramming rooftops can help with major issues such as climate change, a lack of housing, and the transition to renewable energy. 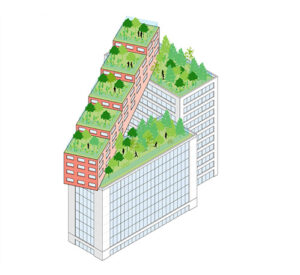 The catalogue addresses the practical side of using roofs: What are the different options for construction? Which ideas are suitable for which types of building?

The Rooftop Catalogue also offers a glimpse of the future; what will it take to make this a reality?

“I think we need a new Building Code, or rather a Rooftop Code, with a helpdesk for the homeowners’ associations and corporations that take the initiative. You should be able to stack the four elements – water, greenery, energy, and population – on top of each other, like a sandwich. It should be defined in some kind of regulation that rooftops should be able to support that weight. Stronger structures are more sustainable,” says MVRDV founding partner Winy Maas.

The launch of the Rooftop Catalogue is part of Rotterdam Architecture Month, when MVRDV and other Rotterdam architecture firms showcase their work and ideas. MVRDV is also participating with, among other things, a sneak preview of the exhibition MVRDVHNI: The Living Archive, which opens this autumn in Het Nieuwe Instituut. Outdoor activities will also be organized.