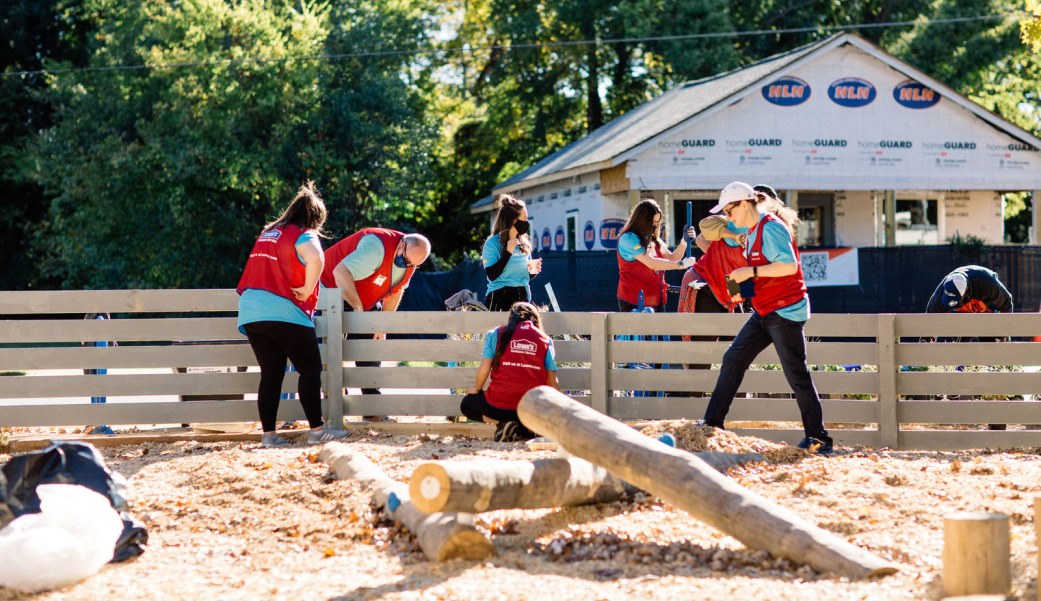 On June 23, 2022, Lowe’s revealed the 100 community-nominated impact projects that have been selected as part of this year’s Lowe’s Hometowns program, with 2022 serving as the first of a five-year, $100 million commitment to the communities that the national home improvement chain serves.

With projects spanning 40 states and Washington, DC, Lowe’s says the program helps restore and revitalize spaces that serve as the hubs and heartbeats of communities, including neighborhood housing, parks, community centers and much more.

From revitalizing a North Carolina community garden to combat food insecurity in a neighborhood without a grocery store, to redesigning an Arizona elementary school library space to better serve and educate its students, these projects highlight the continual need to prioritize community service, celebrate people and empower possibility.

“We’re excited to continue improving hometowns across the country by building on our longstanding commitment to serving the communities where we live and work,” said Marvin Ellison, Lowe’s chairman and CEO. “With support from our associates, neighbors and partners, Lowe’s Hometowns will address urgent needs in communities, from revitalizing vibrant green spaces to supporting first responders and local heroes, as we strive to make hometowns better for all, including those in real need.”

Building on the success of 100 Hometowns, which celebrated Lowe’s centennial in 2021 and supported 100 community impact projects across the U.S., Lowe’s Hometowns comes at a time when communities and local organizations are working hard to continue navigating the pandemic’s impact.

Three-quarters of nonprofits have reported an increase in demand for their services since the start of the pandemic, according to Lowe’s strategic impact partner Points of Light, a global nonprofit organization that inspires, equips, and mobilizes millions of people to take action that changes the world.

“One of the most essential elements Lowe’s is accomplishing through this work is listening to and learning from the communities to better understand the needs and maximize the impact,” said Natalye Paquin, president and CEO, Points of Light. “Lowe’s innovative approach to community-led philanthropy is represented in the diversity of projects that they are supporting. Points of Light is proud to be their strategic impact partner and help connect them with communities around the United States.”

In addition to working with local Lowe’s associates and an extensive network of Pros, nonprofits and community groups, Lowe’s is partnering with design expert and Emmy-nominated host Bobby Berk, who will serve as the Lowe’s Hometowns ambassador. Berk personally nominated My Friend’s Place as his Hometowns project and will oversee its renovation.

My Friend’s Place offers comprehensive services to youth experiencing homelessness in Los Angeles. Berk is also advising on the concept and design of the Sid Katz House of the Ronald McDonald House Charities in San Antonio, which suffered devastating damage during 2021’s winter storm and supports families with children battling a terminal illness or life-threatening injury.

“To be able give back to organizations that do so much for our communities makes the Lowe’s Hometowns initiative special not only to me but also to so many other Americans who will be positively impacted,” said Berk. “Having personally experienced youth homelessness, helping My Friend’s Place do even more to support youth facing the same situations I did is incredibly personal to me. And supporting Ronald McDonald House Charities’ San Antonio team that keeps families and children together during tough times, that’s what community impact – and Lowe’s Hometowns – is all about.”

The 2022 Lowe’s Home Team, led by NFL legend Drew Brees, the Home Team general manager, and a team of current and former NFL players including Justin Herbert, Christian McCaffrey, Travis Kelce, Micah Parsons, Chris Godwin, Matt Light and Kelvin Beachum will also support a project in their teams’ home cities. Each player’s project will focus on giving back to their local communities in unique and impactful ways, from increasing access to shelters and affordable housing, to supporting education and learning, expanding health services and much more.

This year’s Lowe’s Hometowns projects are slated to be completed by the end of 2022.