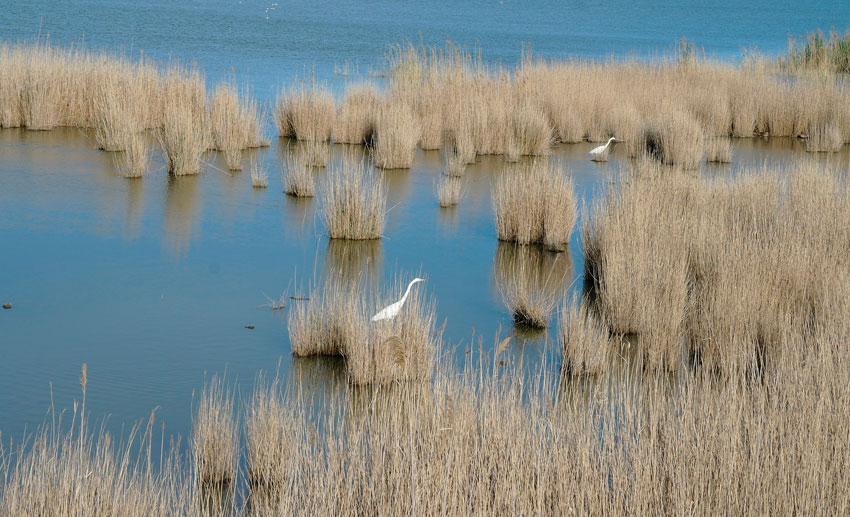 On December 20, 2021, it was announced that the Maritime Engineering Laboratory (LIM) of the UPC (Universitat Politecnica de Catalunya – BarcelonaTech) is leading a European project to restore the coast and adapt it to climate change.

It’s a “shock plan” for the next four years funded by the European Union under the European Green Deal. Pilot projects will be carried out on the Ebro Delta and other locations in the Mediterranean, the Baltic, the Black Sea and the North Sea.

Coastal areas are facing progressive degradation and increasing risks due to human activity. They have the highest population densities in the world and are developing and urbanising faster than inland areas. They are also among the most productive and biodiverse environments, with significant and often underrated carbon storage potential, i.e. coastal blue carbon, captured by coastal ecosystems.

The European project Large Scale RESToration of COASTal Ecosystems Through Rivers to Sea Connectivity (REST-COAST) aims to reduce coastal risks, improve biodiversity and develop coastal blue carbon to mitigate climate change. The four-year action plan to restore the coast will be replicable and scalable to any coast on the planet. Launched in October, the project has a budget of 18.4 million euros and is part of the European program Horizon 2020. It is conceived to align decarbonized coastal protection with a contribution to climate mitigation through coastal blue carbon, which is highly efficient if it is compared to other terrestrial ecosystems.

By overcoming present technical, economic, governance and social barriers to restoration upscaling, REST COAST will develop river-coast connectivity and increase the nearshore accommodation space for the resilient delivery of coastal ecosystem services such as risk reduction, environmental quality and fish provisioning. By enhancing these ecosystem services, REST-COAST will increase the commitment of citizens, stakeholders and policy makers towards a long-term maintenance of coastal restoration. Such a commitment will go hand in hand with a transformation of governance and financial structures, supported by evidence-based results on shared benefits across scales and social groups.

For these highly vulnerable coastal areas, the project will assess how natural solutions reduce the risks of erosion and flooding and how water quality can be improved to make the coast more resilient to climate factors.

REST-COAST is led by researcher Agustín Sánchez-Arcilla, director of the Maritime Engineering Laboratory (LIM) of the Universitat Politecnica de Catalunya · BarcelonaTech (UPC) and a professor at the Barcelona School of Civil Engineering. It is the only project under the European Green Deal that focuses on restoring coastal biodiversity and ecosystem services.

The scientists will analyze 12 critical points on the European coast that are vulnerable. They include three main pilot projects: the Ebro Delta in the Mediterranean, Waddensea in the North Sea and the Venetian Lagoon in the Adriatic.

In addition, they will study a lagoon in the Baltic, a bay in the Black Sea, the Rhone Delta and the Bay of Arcachon on the French Atlantic coast, the low coasts of Sicily and Nahal Dalia on the coast of Israel.

Professor Agustín Sánchez-Arcilla explains that “REST-COAST will develop a systemic approach to coastal restoration based on scalable coastal adaptation plans supported by a shift in governance and policies that are aligned with the Green Deal goals of the European Union.”

These plans will underpin a transformative change in governance and policies, proving the importance of the coastal dimension in the EU Green Deal for adaptation/mitigation under climate change.

Professor Robert Nicholls, from the University of East Anglia and the Tyndall Centre (one of the participants in the project), stresses that “with the strong commitment apparent in the build-up and discussions at COP26 on nature-based solutions, REST-COAST is extremely timely for the global climate agenda.”

Adopting natural solutions Based on nature-based actions and solutions, the expected results of the project will translate into technological advances and will influence funding and policies related to large-scale coastal restoration projects. Through blocks of natural solutions, connectivity will be increased in the continuum river-delta-estuary-coast-sea.

Dr. Carles Ibañez, from the Climate Resilience Centre of Eurecat, says “REST-COAST is a good example of the type of applied research and innovation we need to face the climate emergency through large-scale restoration of coastal ecosystems in order to both adapt and mitigate. My experience at COP26 tells me that it is urgent to scale up nature-based solutions all over the planet.”

In line with these statements, Professor Sanchez-Arcilla adds, “Unless we decarbonise coastal protection and introduce the exceptional coastal blue carbon potential of coastal ecosystems, it will be hard to simultaneously advance in coastal protection and climate mitigation”. Sanchez-Arcilla expects that REST-COAST contributions “will demonstrate how coastal adaptation can be carried out with a controlled carbon footprint and cost, although it will require early action and investments based on coastal optimism.”

To achieve this, a coordinated approach will be used for the various pilot studies in Europe. The latest advances in modelling and measurement, biodiversity restoration techniques, new means of joint funding and advances in the integration of management and applicable policies will be implemented. In addition, early warning systems will be developed to improve coastal sustainability and prevent the effects of storms, such as Storm Gloria in 2020 or future storms that could cause a considerably higher sea level than at present.

A climate laboratory on the Ebro Delta Solutions for the Ebro Delta pilot study are based on river-delta-coast connectivity, the durability of sedimentary resources through diversity and monitoring to support maintenance. The plan specifically includes sediment by-passing or back passing and the attenuation of hydro-morphodynamics to counteract the effects of sea level rise.

Climate change, rising sea levels, the action of waves and other factors, such as the currents that are generated when waves break, cause sediment to become mobilized, the Trabucador sandbar to break, the beach to lose sand and the bay of the northern half of the Delta (El Fangar) to get gradually closed. Therefore, the scientists are developing nature-based measures that help to reduce these effects.

Additionally, early action will be taken using a severe weather alert system. The water-sediment-ecosystem interaction will be analysed under current climate conditions and under artificial warming that simulates future climate conditions, to assess how the ecosystem services will evolve. This analysis will be performed on site on the Ebro Delta with a cabin to control environmental parameters, like a temporary climate laboratory.

The project will contribute to giving a sustainable response to the climate crisis and will help to protect coastal ecosystems and biodiversity, which are unique and difficult to restore when they go beyond certain limits of degradation. The project will include measures to achieve net zero emissions in Europe by 2050. REST-COAST brings together 38 partners from 11 countries: Germany, Bulgaria, Spain, France, the Netherlands, Italy, Israel, Poland, United Kingdom, Switzerland and Turkey.

In addition to the LIM and the UPC’s International Centre for Coastal Resources Research, the Spanish partners are Eurecat; Albirem; the Technical University of Madrid; the Ministry of Climate Action, Food and Rural Agenda of the Government of Catalonia and the Catalan Water Partnership (linked to the Ministry); the Spanish Ministry for the Ecological Transition and the Demographic Challenge; and the NGO SEO-Birdlife.

Photo of Spain’s Ebro Delta, one of the pilot sites, is courtesy of UPC.