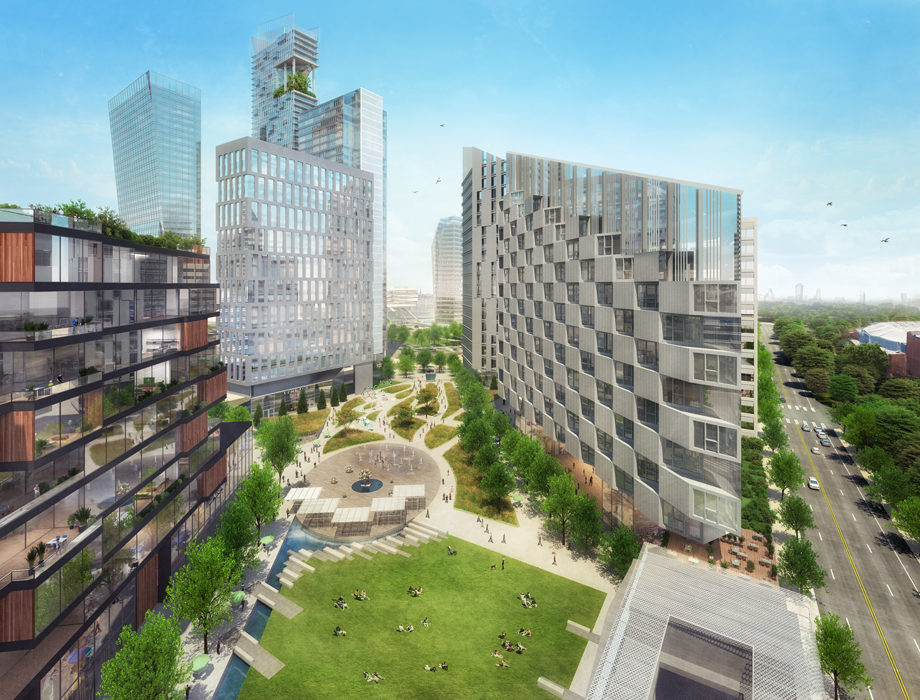 Atlanta, Georgia is apparently not content to have two of the world’s largest and most visionary revitalization efforts: Atlantic Station. First planned in the mid-1990s and officially opened in 2005, this spectacular project transformed the hideous, defunct 138-acre Atlantic Steel mill into the downtown’s most vibrant residential and entertainment hotspot.

Revitalizing a huge, contaminated downtown factory site was a great start. But Atlanta also boasts what might be the world’s largest metropolitan area-scale revitalization initiatives—the Atlanta BeltLine. The BeltLine is undoing decades of bad planning—and outright lack of planning—which made the city a national poster child of out-of-control sprawl, which resulted both downtown devitalization and traffic nightmares.

The Atlanta BeltLine is the most comprehensive transportation and economic development effort ever undertaken in the City of Atlanta and among the largest, most wide-ranging urban redevelopment programs currently underway in the United States. The Atlanta BeltLine is a sustainable redevelopment project that will provide a network of public parks, multi-use trails and transit along a historic 22-mile railroad corridor circling downtown and connecting many neighborhoods directly to each other. 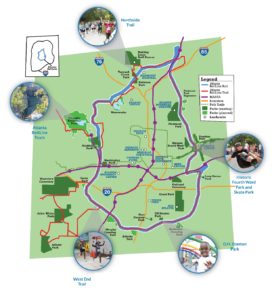 The Atlanta BeltLine is transforming the city with a combination of rail, trail, greenspace, housing and art. It will ultimately connect 45 intown neighborhoods, provide first and last mile connectivity for regional transportation initiatives, and put Atlanta on a path to 21st century economic growth and sustainability.

The beauty of the Atlanta BeltLine is that it offers not only modern conveyances and exciting new development, but it is a living, breathing part of our community; not simply a means of getting somewhere, but a destination unto itself. It offers a chance for Atlanta to redefine what it is to be a neighbor, to be a community, to be a region, and to share all that it has to offer.

First conceived as a 1999 master’s thesis by Georgia Tech student Ryan Gravel, the Atlanta BeltLine evolved from an idea, to a grassroots campaign of local citizens and civic leaders, into a robust new vision of an Atlanta dedicated to an integrated approach to transportation, land use, greenspace, and sustainable growth. 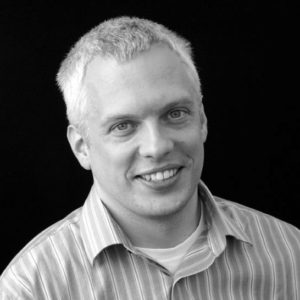 With the BeltLne well underway, Atlanta is now taking a major step to reconnect their downtown by covering urban highways that severed neighborhoods decades ago. They were inspired by the success of Klyde Warren Park in Dallas. That visionary revitalization effort created 5 acres of green­space in 2012 by capping a state highway that split the downtown. Since then, surrounding real estate values have jumped over 50%.

Atlanta’s new effort is called “The Stitch“.  An alliance of neighborhood boosters and downtown landowners is pushing an ambitious new proposal, bearing an estimated price tag of $300 million. They believe it can bring about a fresh renaissance in Atlanta’s urban core and finally erase the half-century-old barrier between downtown and Midtown.

This transformative project envisions capping an urban highway called the Downtown Connector by constructing a ¾-mile platform over the highway, extending from the Civic Center MARTA station at West Peachtree Street to Piedmont Avenue.

This new space would create urban greenspace and foster new development both atop and adjacent to the platform. The re-imagined Emory Square MARTA station (currently Civic Center MARTA station) is a key focal point of The Stitch. The station will be re-positioned as a major transit hub for this part of the City, stimulating both commercial and residential growth. Above all, the project will fill the void between Downtown and Midtown, disjointed years ago due to construction of the interstate. The “re-stitching” of the neighborhoods will bring about a unified central business district for the City of Atlanta. 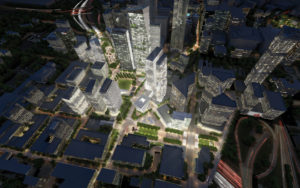 The Stitch from above

The effort would turn a half-mile stretch of interstate highway into a tunnel. More importantly, it would create 14 acres of new terrain out of what is now a no-man’s land of surface parking, empty lots, and an open trench containing a dozen lanes of traffic—metaphorically restitching the urban fabric that was torn by the placement of the freeway.

That new landscape could include public greenspace to host concerts and events—parks bracketed by newly reconnected streets that now dead-end. It would also—perhaps by financial necessity—include a cluster of new hotels, residential buildings, and office towers, according to a study that forms the conceptual blueprint for the Stitch. 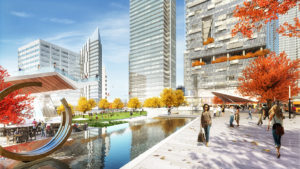 The Stitch at ground level

“We’re trying to create an urban amenity that will spur development,” says A.J. Robinson, president of Central Atlanta Progress, the nonprofit devoted to promoting economic development downtown. It spent close to $100,000 to commission the 114-page study from the Atlanta office of Jacobs, a global engineering company.

Central Atlanta Progress/Atlanta Downtown Improvement District (CAP/ADID) has been leading the charge to plan The Stitch and will continue efforts to advance the project. Nearby land owners have also been a part of the process by providing valuable input on the needs and opportunities for this area. Key partners include Cousins Properties, Portman Holdings, SunTrust Bank, St. Luke’s Episcopal Church, Emory University Midtown Hospital, Georgia Power, Compass Real Estate, Richard Bowers & Company, and the Hyatt Regency Atlanta.

The project is still conceptual, so a construction schedule has not been determined. This is a long-term project that will radically change this neighborhood, and thus requires a significant amount of design and engineering work to complete.

Next steps to advance the vision will include completing a detailed civil engineering survey, a technical feasibility study and a schematic design. Initial estimates based upon per acre costs for similar recent capping projects place the price at approximately $300 million. 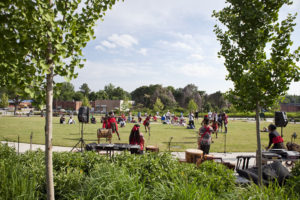 The Stitch would eliminate the hard line that’s existed between downtown and Midtown since the highway was carved through Atlanta in the late 1940s. BeltLine visionary Ryan Gravel says it’s difficult to overstate the potential impact of a seamless connection between the two now-distinct parts of town. “If the city is to accommodate future growth, you have to leverage the downtown core, but it has to be a desirable place to be. Right now it’s fragmented and difficult to navigate, especially on foot,” he says. “This is a logical place to start.” 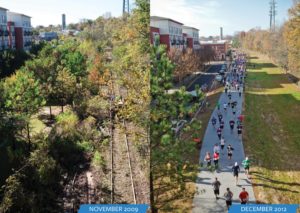 BeltLine before and after (photos via BeltLine.org)

If you’ve read Storm Cunningham‘s new Resilience Strategy Guide, you know that the most successful revitalization projects are based on a “3Re” strategy that repurposes, renews, and reconnects a place’s natural, built, and socioeconomic assets. That certainly describes Atlanta’s approach these days.

With Atlantic Station, the Atlanta BeltLine, and now (if approved) The Stitch, Atlanta’s story of visionary revitalization efforts now has a past, present, and future. Long known as America’s poster child of bad planning, the city can legitimately be called a revitalization superstar.

Renderings of The Stitch are by Jacobs, an engineering firm founded in 1947 by Joseph J. Jacobs in Pasadena, California. Begun as a one-man engineering consultant, they are now a publicly traded Fortune 500 company.