On October 28, 2019, the neighborhood of Jamaica in New York City‘s borough of Queens received some exciting news. A long-vacant historic hospital was about to be repurposed and renewed into much-needed affordable and supportive housing. 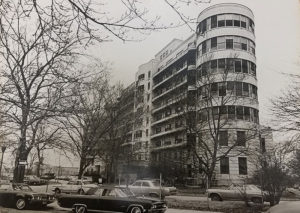 The structure was built in the 1940s at the the Triboro Hospital for Tuberculosis. It’s known as the T-Building, and was designed by famed architect John Russell Pope. It eventually became a general hospital in the 1970s, but has been vacant for some time now. The T-Building was listed in the National Register of Historic Places in January of 2019.

The historic renovation of the property has begun and is anticipated to be completed by July 2021, with lease-up beginning in August 2021. 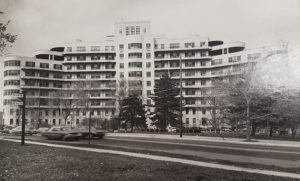 “We are proud to continue supporting projects that allow homeless families to live in dignity,” said Wambua. “Securing the largest allocation ever made in New York City is a great achievement for the development team and we look forward to assisting with projects that serve an immediate need in our community.”

The 200-unit development will provide a mix of supportive housing for special needs and homeless tenants, as well as affordable housing for low- to moderate-income households.

“Dunn Development Corp. is thrilled to be the custodian of this historic building and to be partnering with Merchants to give it new life,” said Martin Dunn, president of Dunn Development Corp. “Not only are we turning this 1938 hospital into critically needed homes for formerly homeless, low and middle income New Yorkers, we are restoring an architectural gem that will enhance the entire neighborhood.” 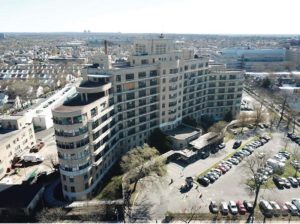 The project—simply known as T-Building—will comprise the largest 9% Low-Income Housing Tax Credit allocation ever made in New York City. In addition, the financing structure will benefit from a capital stack that includes a significant capital subsidy from New York City’s Department of Housing Preservation & Development (NYC HPD), as well as Bank of New York Mellon, Red Stone Equity and other sources. The funding was secured by Mathew Wambua, Merchants Capital executive vice president, and Michael Milazzo, Merchants Capital vice president of loan originations.