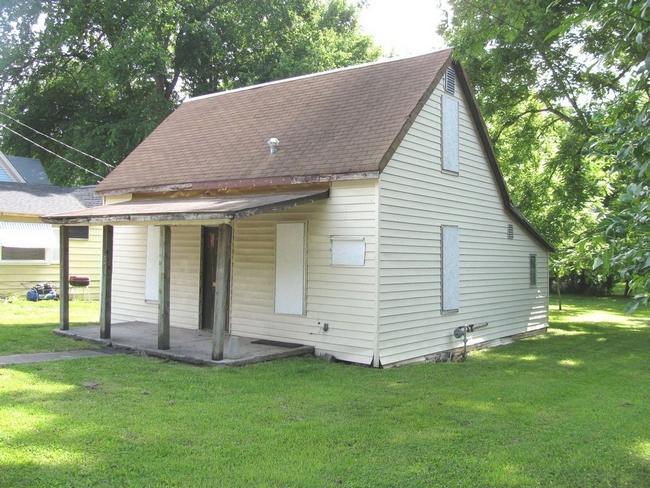 Kim Mailes, a long time citizen of Neosho, Missouri can easily be found these next three weeks. He will be part of a volunteer group working to restore the 1872 Neosho Colored School.

Besides honoring the town’s built heritage, the work is also a tribute to Neosho native Dr. George Washington Carver, the famed researcher and inventor, best known for inventing peanut butter, who attended the school.

The restoration of the little schoolhouse began June 14, 2016 when a nationally recognized restoration group, HistoricCorps, came to town to start the process.

What looks like a small house is actually the school that served black students in Neosho in the 1870s. It was the first school attended by George Carver (he did not adopt “Washington” as a middle name until he had left Neosho. He was often called “The Boy Carver” at that time.)

Officially named the 1872 Neosho Colored School, the school was later covered with siding and extensions or rooms were also added. Arvest Bank donated the house to the Carver Birthplace Association in 2004.

This is the second year that Mailes has been involved in historic restoration. “I have believed in the Carver School House restoration project since its beginning. It just seems right for twenty-first century citizens of Neosho to step up and honor and preserve the legacy of Dr. Carver, along with all African Americans in our town who eagerly sought education after the Civil War.”

“There’s something about the camaraderie of coming together with ten or twelve other volunteers from all across the United States to work on a historic structure worth saving. We will have volunteers from Chicago, New Jersey, Colorado, Texas and other places working on the school,” Mailes said. “I will be on site each day during the three weeks, working side-by-side with others, Being a hometown boy, I hope my connections and local knowledge can expedite the work.”

Volunteers are responsible for their own transportation to and from Neosho. They will be provided with breakfast, lunch, dinner, water and snacks. Volunteers must work full days and must have proper attire including work shoes, long pants and work shirts.

Ten volunteers are added to each session. Many who volunteer are families who want to serve their country on their vacation. Others are church groups, civic groups, employee groups or individuals. Volunteers as young as 14 may serve, although volunteers under age 18 must be with a responsible adult.

HistoriCorps provides volunteer opportunities preserving historic structures on public lands across America. Join us for an adventure in the great outdoors. Help us hammer, reroof, chisel, repair, replace, paint, and sand historic buildings back to life. No previous construction experience is required, just a positive attitude and strong work ethic.